While bitcoin and the broader crypto market look to be taking a breather, OMG, the native token of scaling solution OMG Network, has reached its highest level since April 2018.

Bitcoin, the top cryptocurrency by market value, was trading sideways on Monday – near $48,000 for the third straight day, after rising by nearly 10% on Friday. That was the biggest single-day gain in almost three months, based on CoinDesk 20 data.

While increased hopes for a futures-based ETF are likely to keep the market buoyant in the short term, an eventual disappointment, if any, could bring some selling pressure.

“Run-it-up turbo and disappoint? This makes me think of July 2018, when crypto went on a manic run higher driven by misplaced ETF expectations,” the trader and analyst Alex Kruger tweeted Sunday, adding that an ETF approval would be massively bullish and lead to rotation of money into bitcoin from alternative cryptocurrencies.

The SEC has already extended its review of applications from Global X, Kryptoin, Valkyrie and WisdomTree by 45 to 60 days. The new deadline dates for the SEC to make decisions are Nov. 21 for Global X, Dec. 8 for Valkyrie, Dec. 11 for WisdomTree and Dec. 24 for Kryptoin, as CoinDesk’s Jamie Crawley reported. Several other ETF applications are pending approval in the coming weeks.

According to technical charts, last week’s move in bitcoin has opened doors for a re-test of early September highs above $52,000.

“Bitcoin finally resolved its 10-day sideways range by exceeding the downtrend which had been in place since early September,” research firm FSinsights said in an email. “Note, trends had turned negative a month ago technically, but after a visible three-wave decline into late September, Friday’s move is a big positive in helping to resolve this consolidation. The first upside target lies at September highs at $52,956, then $64,895.”

OMG Network’s OMG token is trading at a 3.5-year high of $18 on Coinbase. The cryptocurrency has seen a six-fold rally since July 19 and surged 82% last week alone, topping the list of best-performing coins with more than a $1 billion market cap last week, according to Messari data.

Analysts said the token is benefitting from surging investor interest in so-called layer 2 or “L2″ scaling projects that facilitate faster and cheaper transactions and help reduce the load on Ethereum’s blockchain. OMG Network creates a value transfer layer on top of Ethereum that bundles Ethereum transactions and validates them through a speed-optimized child chain before sending them back to the Ethereum blockchain for confirmation.

“OMG’s rise seems to be on investor excitement in L2s and on the announcement of the mainnet launch of Boba Network, an L2 optimistic rollup, as OMG token holders are eligible for an upcoming airdrop of the BOBA governance token,” digital currency platform CrossTower’s Research Analyst Martin Gaspar told CoinDesk.

Boba Network, a new layer 2 solution created by blockchain developer Enya in collaboration with OMG Network, will be airdropping its governance token BOBA to OMG token holders as of the snapshot date of Nov. 12, 2021 on a 1:1 basis.

“Named the Boba Network, the project is a layer-2 solution that allows crypto to have payment processing speeds that rival payment heavyweights like Visa and Mastercard,” Don Guo, CEO of Broctagon, said. “Game-changers like these, much like the NEXUS WorldBook movement, which is an inter-exchange liquidity network for digital assets, can create greater visibility and trust for crypto as a whole.”

OMG’s rally is accompanied by an exodus of coins from exchanges and appears sustainable. The number of coins held on exchanges fell to 28.9 million Sunday, hitting the lowest since Sept. 2018, according to Glassnode. The tally has declined by 42% since February. 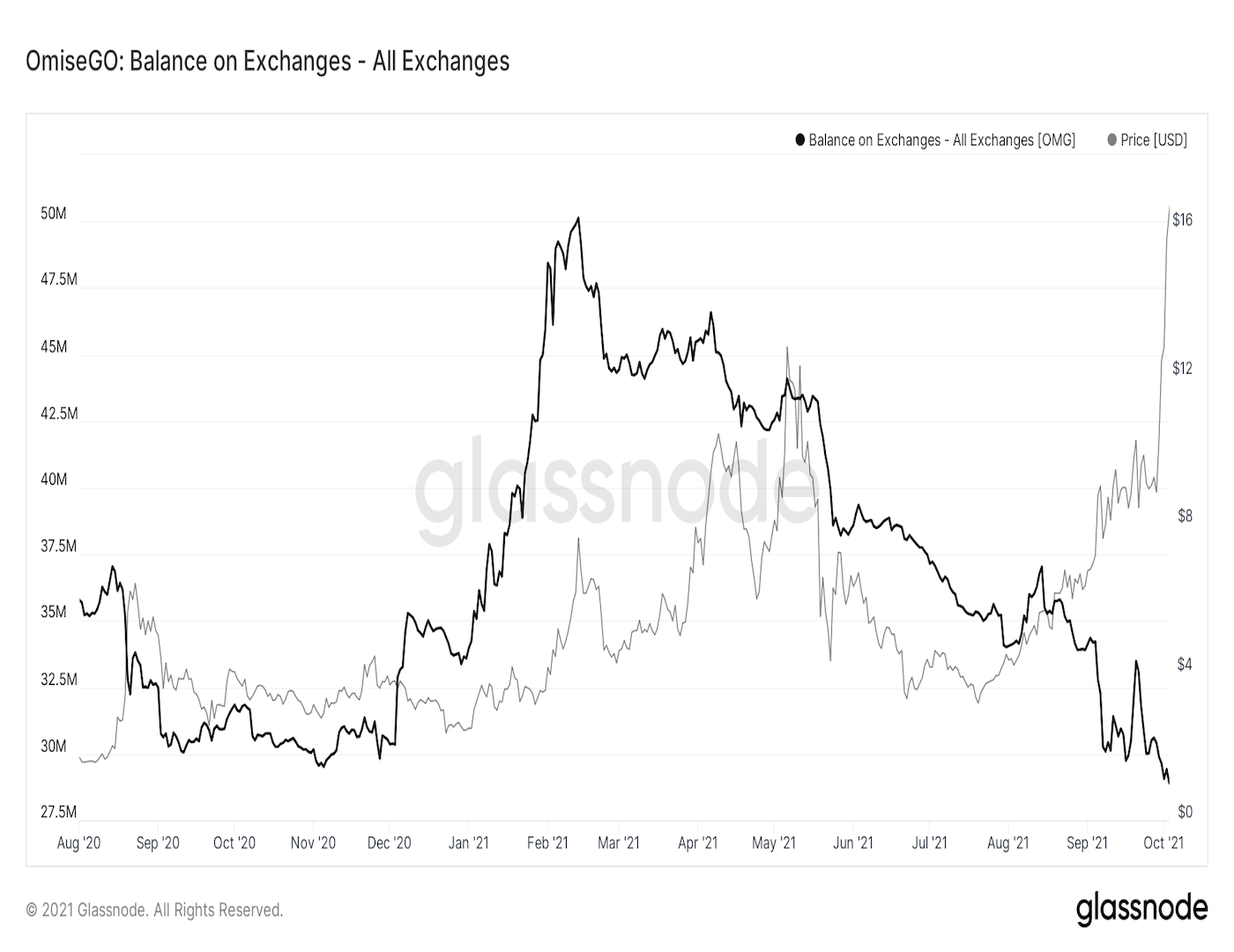 A slide in exchange balance typically represents strong holding sentiment is taken as a bullish indicator.