Cryptocurrencies rallied on Friday as bitcoin broke above $47,000 for the first time in two weeks. BTC is up about 10% over the past 24 hours, compared with an 8% rise in ether. Global equities are also stabilizing after a volatile week.

“The move higher [in bitcoin] resulted in over 35 million short futures positions being liquidated across major exchanges,” FundStrat wrote in a newsletter on Friday.

“However, technically speaking, BTC is still trading in the range and has to decisively break the $50K resistance if we are to see higher prices,” Ulrik K. Lykke, founder of digital asset hedge fund ARK36, wrote in an email to CoinDesk. “It is not yet certain whether today’s price really will prove indicative of a greater uptrend.”

Some analysts characterize the recent upside move in cryptocurrencies as an oversold bounce. Technically, that occurs when prices become stretched to the downside, which encourages short sellers to exit their positions.

The chart below shows MRB Partners’ cyclical momentum index, which is an equally weighted aggregate measure of the speed of price changes across a select group of cryptocurrencies. The index shows cryptocurrencies became the most oversold since early last year.

“The challenge for this speculative space is there remain too many macro headwinds to be resolved,” Santiago Espinosa, a strategist at MRB Partners, said in an interview with CoinDesk.

Espinosa said the global regulatory crackdown is still evolving. Outside of China, U.S. and European authorities may enact stricter measures that could handicap crypto prices by making it harder for users to exchange crypto for fiat currencies, according to Espinosa. 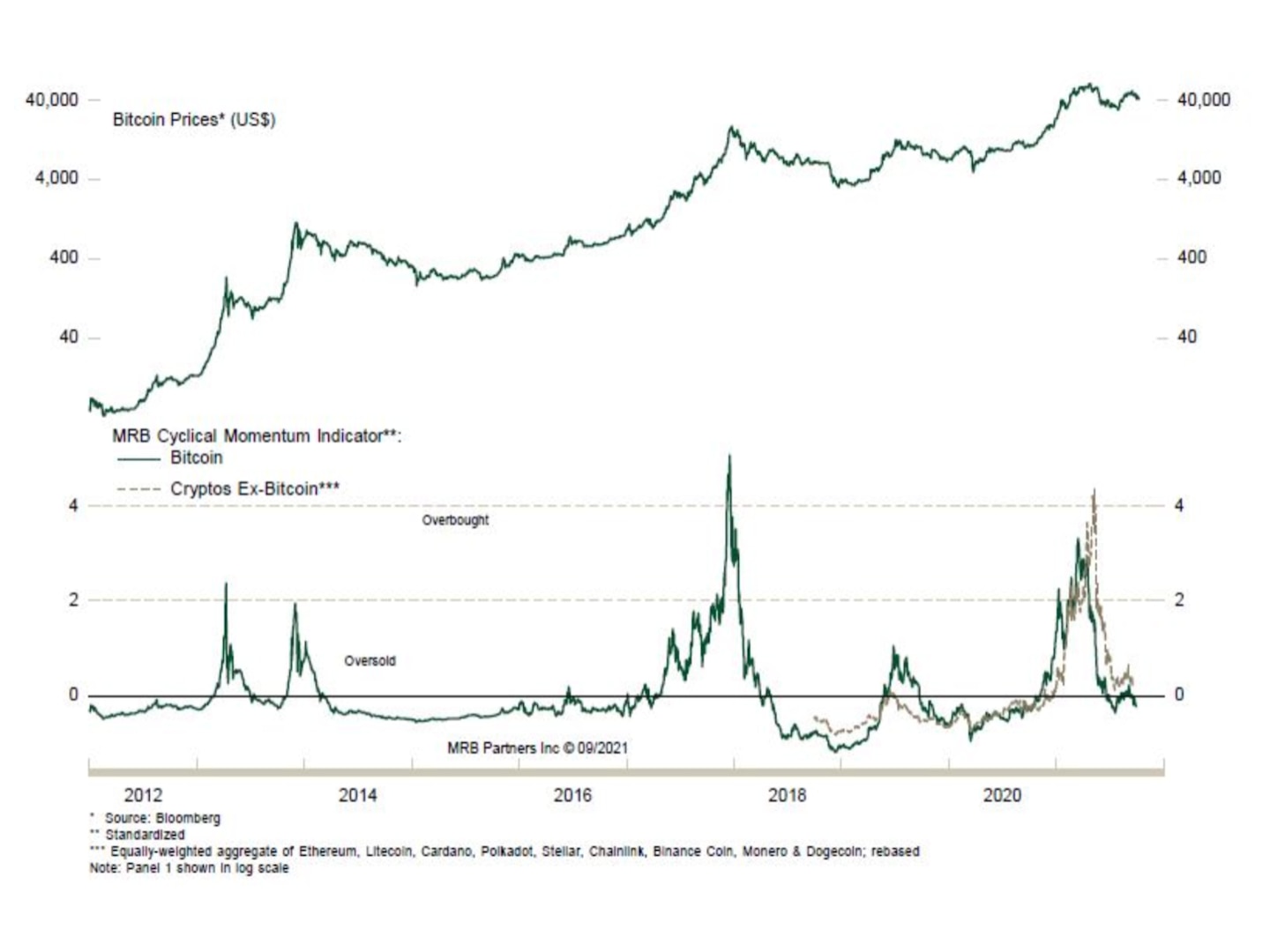 Ether, the world’s second-largest cryptocurrency by market capitalization, returned to above $3,000, and is up about 9% over the past week. Similar to bitcoin’s rise, ether’s uptrend is stabilizing as buyers gained momentum over the past few days. The next level of resistance for ETH is seen at around the $3,500-$4,000 range, which could limit upside over the short term. 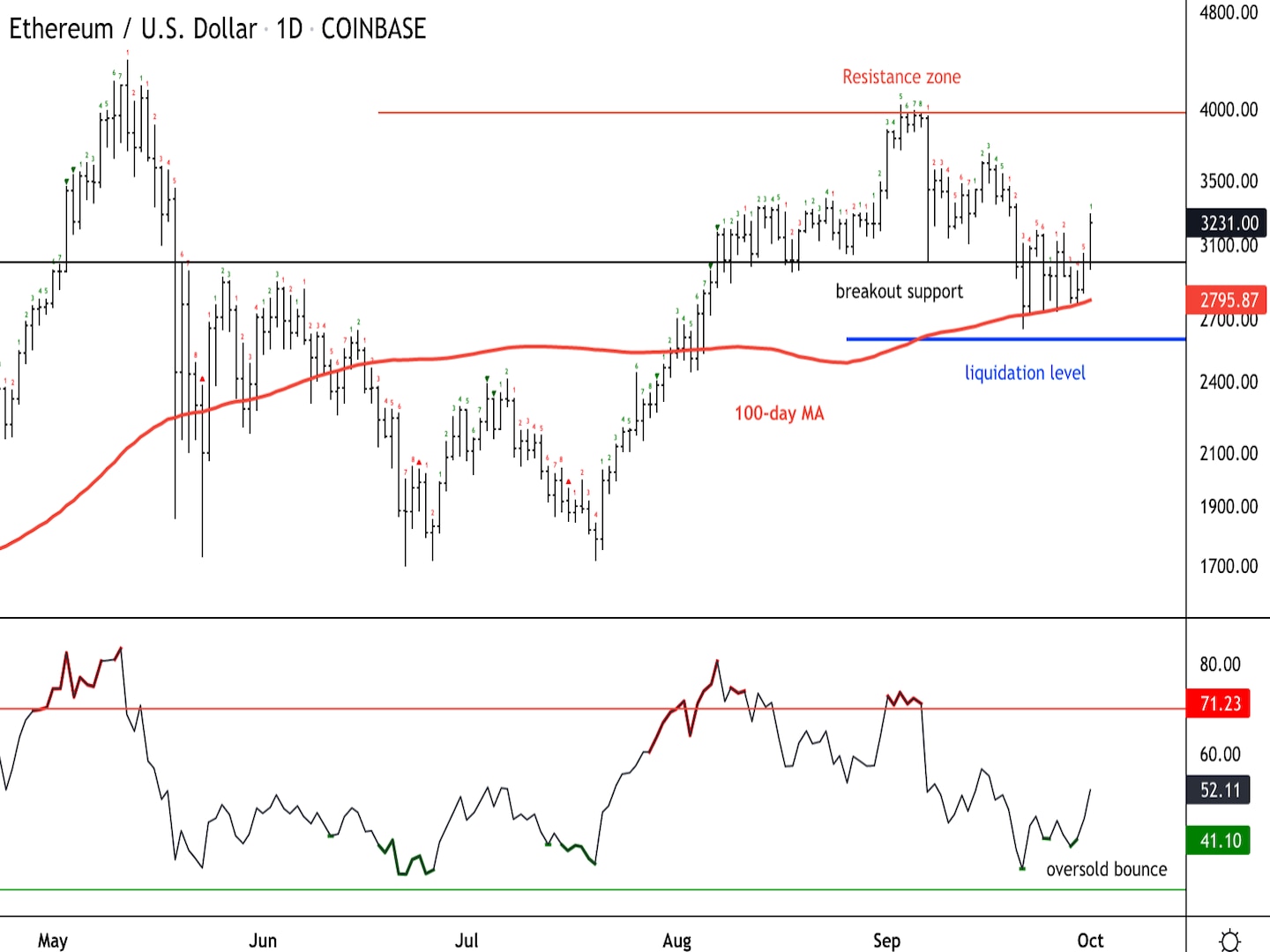 ETH lost some ground relative to BTC over the past month during the broader crypto sell-off. However, the ETH/BTC ratio is holding support above 0.66, which could stabilize the relative pullback. 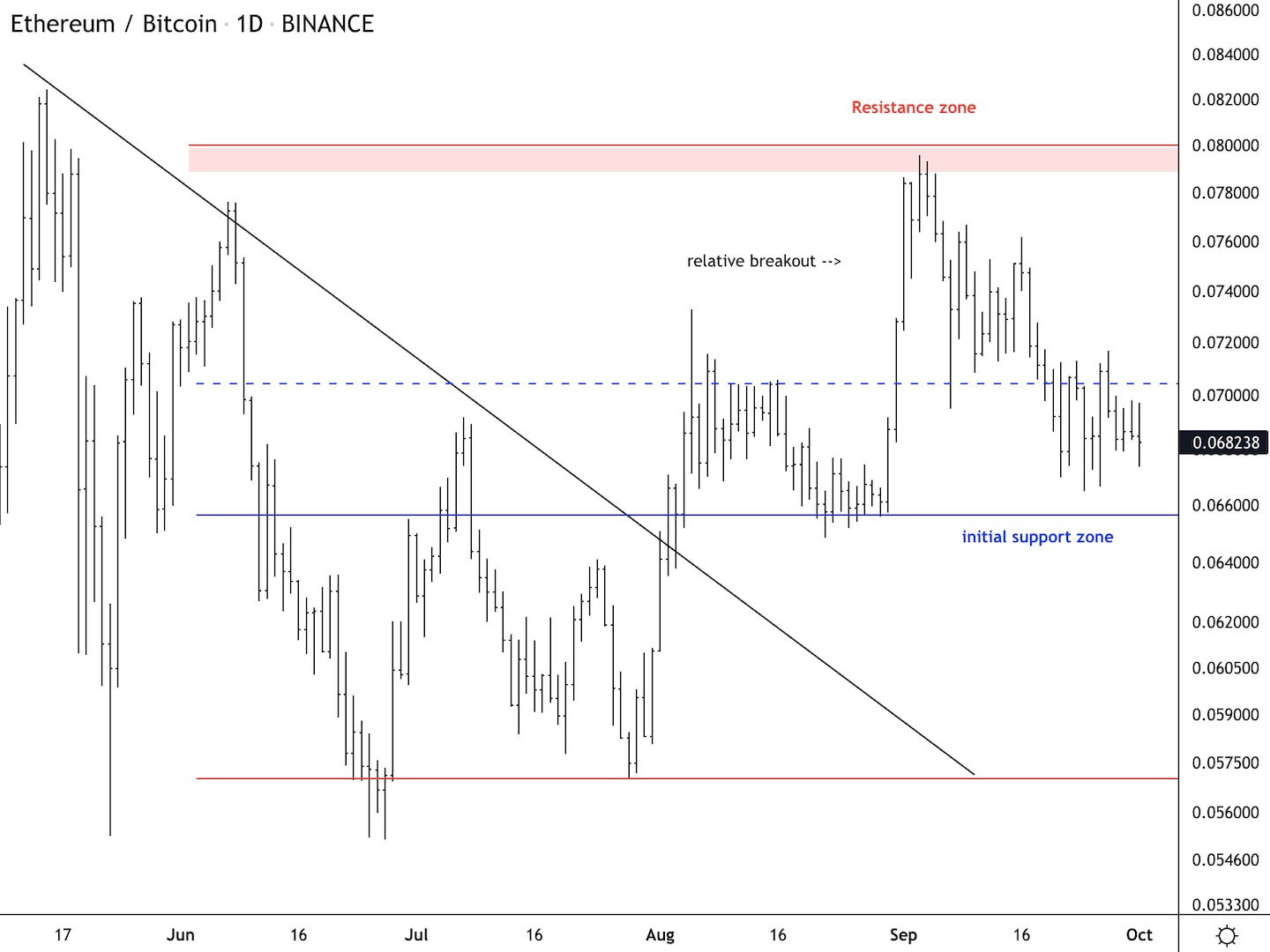 The crypto “cash-and-carry” trade – where traders simultaneously enter into a long position on bitcoin or ether in the spot market and then a short position in the futures market, a way of betting on the eventual convergence of the two prices – has lost its shine, CoinDesk’s Omkar Godbole reported.

Reliable for 30% annualized gains earlier this year, the opportunity has since shrunk to single digits, as the frenzied bullishness witnessed in cryptocurrency markets earlier this year faded and as major exchanges reined in leverage.

But investors can still make double-digit returns via weekly ether or bitcoin “covered call” strategies offered by decentralized finance (DeFi) asset management platforms, including Ribbon Finance and StakeDAO. To do that, investors have to deposit coins in “strategy vaults” designed to automate the trade.