Such gains came as ether lost 23% during the month. Bitcoin, the largest cryptocurrency by market value, whose network isn’t considered a smart contract blockchain, slid 12% in September.

Smart contracts are taking center stage while there’s speculation over which network will play host to the fast-growing businesses that developers are building on these blockchains, from decentralized finance to non-fungible tokens (NFTs).

Increasing activity on these chains and surging fees, or “gas prices,” on Ethereum might be eroding the sector leader’s dominance, according to a report from Ryan Watkins, a research analyst at Messari.

“Unsurprisingly, speculators are piling into these platforms’ corresponding tokens as Ethereum’s dominance gets thrown into question,” Watkins said. 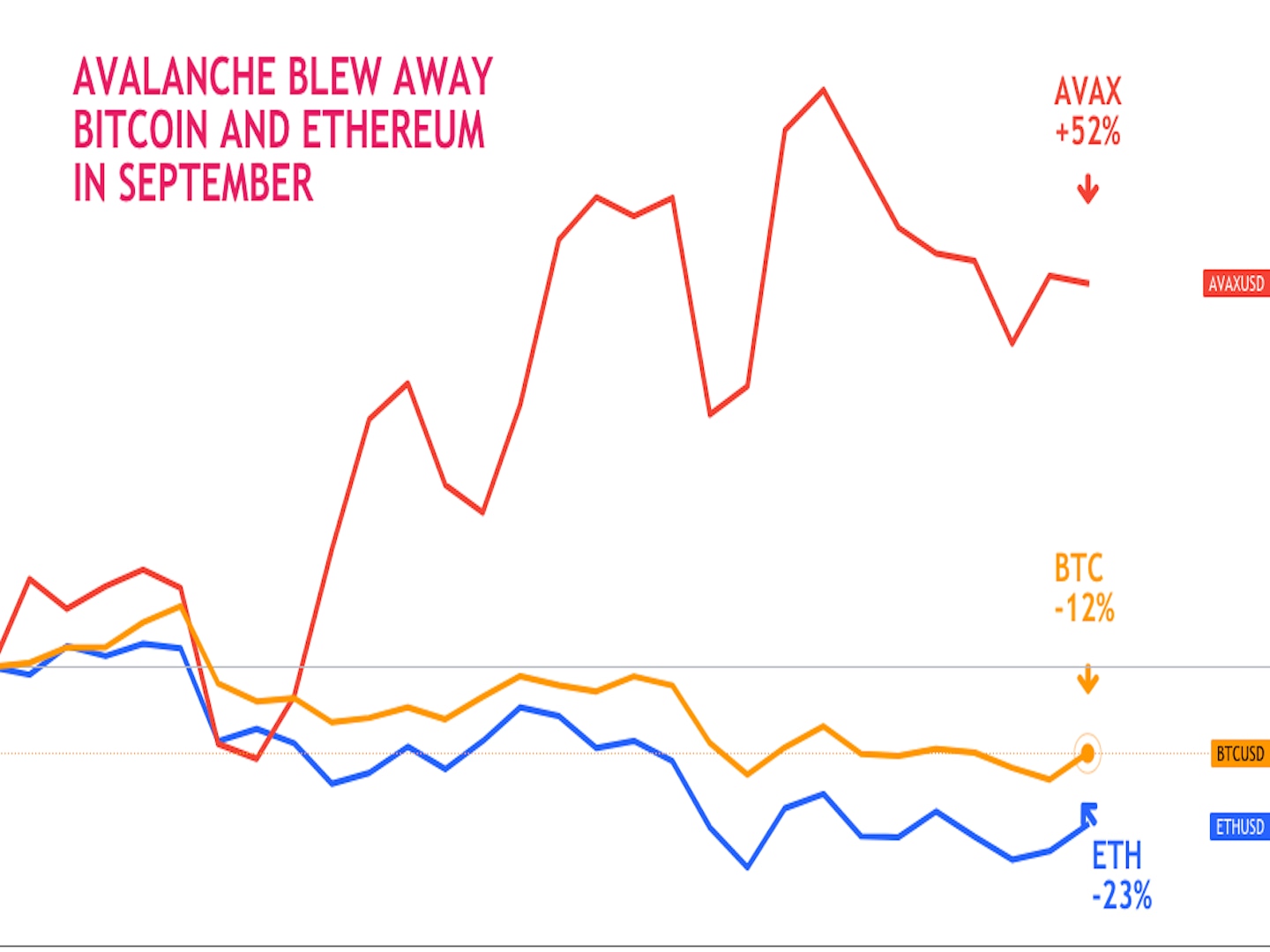 Traders’ recent preference for Ethereum competitors contrasts with the situation earlier this year, when the dominant network’s fast growth riveted investors, and ETH staged a rapid rally. Its market share has risen rapidly and now accounts for 26% of investment products, compared with 11% in January, said James Butterfill, an investment strategist at CoinShares.

Ether’s price is still up nearly fourfold this year, versus a 46% for bitcoin. But Avalanche’s AVAX has jumped 20-fold this year, for a market capitalization of $14 billion. And SOL has multiplied 74-fold, to $41 billion.

“Investors really liked the world computer idea of Ethereum,” Butterfill said. “But due to price rises it has revealed an inefficient network and high gas fees.” This is why there’s a spillover of interest into rival networks, particularly ones that don’t have high transaction costs, he added.

Ironically, Cardano, which implemented its long-awaited smart contract functionality earlier this month, was one of the biggest losers. The blockchain, whose development is led by a former Ethereum developer Charles Hoskinson, saw its ADA token plunge 28%.

Analysts have said that Cardano’s downturn might be a case of buy the rumor, sell the fact, because speculators had bid up the price in anticipation of the upgrade.

Some of the gains were perhaps driven by the rollout of incentive programs, including rewards for users – sometimes akin to free money for those willing to take the time – as well as grants for coders to build or advance new applications . On Sept. 16, Avalanche completed a $230 million private sale of AVAX tokens to crypto funds. Alogrand launched a $300 million fund to support decentralized finance (DeFi) innovation.

“Blockchains are competing to attract talent,” said Denis Vinokourov, head of research at Synergia Capital. “One of the easiest ways to incentivize software developers to build on one chain versus the other is to help with funding,”

Martin Gaspar, a research analyst at CrossTower, attributed the surge to “rising investor optimism on smart contract chains (AVAX and ALGO),” in an email to CoinDesk.

Without developers, according to Vinokourov, there won’t be new projects or new prospective users. Developers are particularly scarce at the moment, he said, and so those incentives are being pushed.

“It goes to show that there is a lot of money sitting on the sidelines,” Vinokourov said.