Bitcoin traded in a tight range on Wednesday as buyers continue to hold support (the price level an asset does not fall below for a period of time) above $40,000. The cryptocurrency is down about 5% over the past week and has moved with stocks in traditional markets.

On Wednesday, U.S. Securities and Exchange Commission Chairman Gary Gensler reiterated his support for futures-based bitcoin exchange-traded funds that would invest in futures contracts instead of the crypto itself, reports CoinDesk’s Danny Nelson.

However, investors have not been quite as eager to plow into bitcoin futures-linked products. One bitcoin futures mutual fund has amassed only $15 million in assets two months after launch, according to a tweet from Eric Balchunas, an analyst at Bloomberg Intelligence.

For now, crypto markets are stabilizing after a volatile month. Some analysts expect trading volumes to rise in October.

Over the past few months, bitcoin’s correlation with the S&P 500 stock index has risen. The recent sell-off across equities and cryptocurrencies encouraged some traders to reduce exposure to both assets, which are deemed to be risky.

Analysts are also concerned about rising inflation, which could stall the economic recovery from the coronavirus pandemic-induced recession of last year. For example, the rise in energy prices, considered volatile, has some analysts concerned about price instability. Slowing growth could present a headwind for equities and cryptocurrencies as investors position themselves for greater volatility and a reduction in monetary stimulus.

“Markets are getting comfortable with Fed tapering, which leads to bottoming in yields, steepening of the curve,” JPMorgan’s equity strategy team wrote in a Monday report, referring to the U.S. Federal Reserve cutting back on its bond purchases.

Unlike the S&P 500, bitcoin’s correlation with commodities continued to decline over the past few months, mostly due to the steady rise in oil and gas prices. 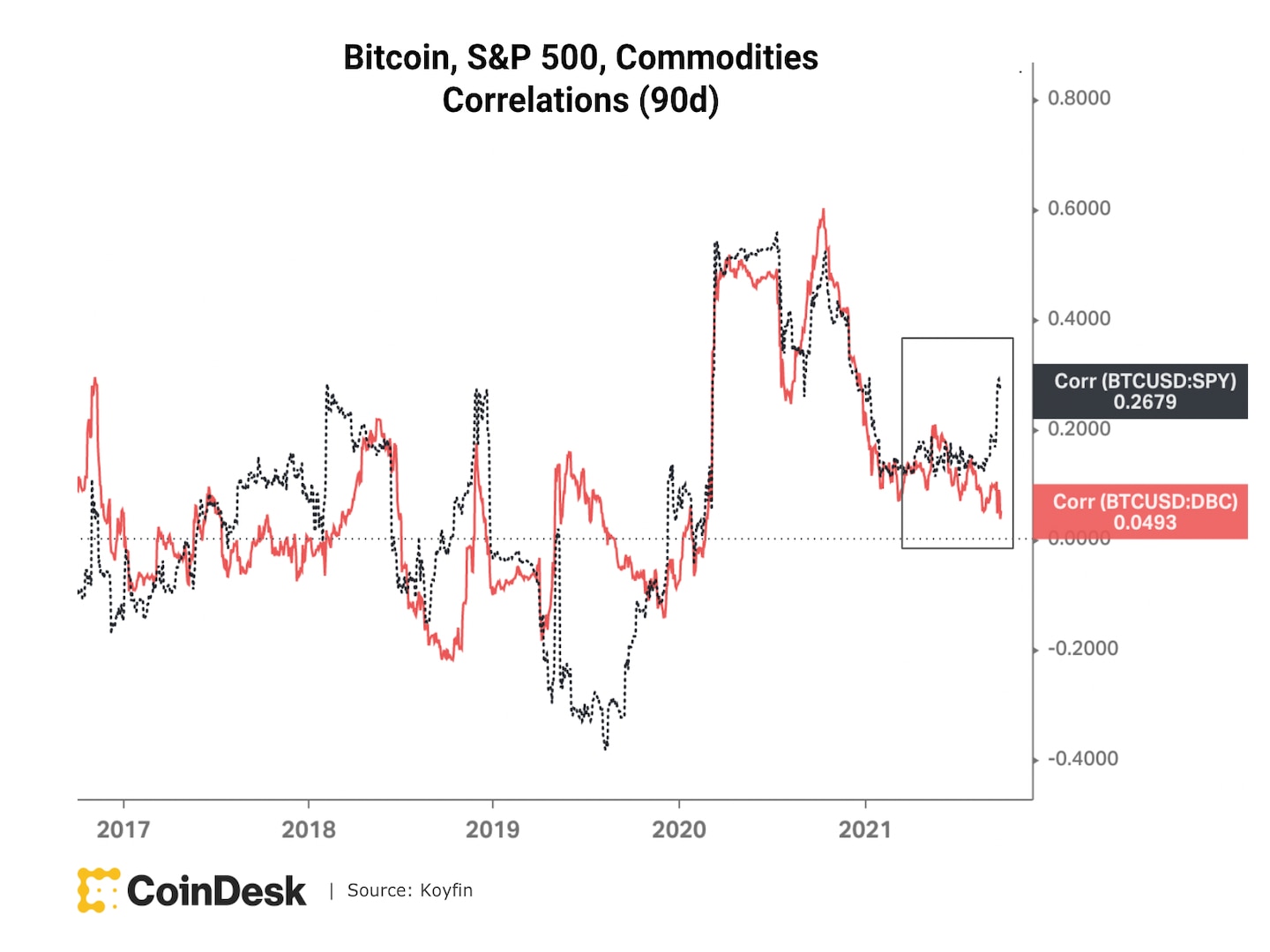 Bitcoin funding rates have been neutral over the past few weeks, suggesting some caution in the futures markets as the spot BTC price oscillates in the $40,000-$50,000 range.

Funding rate refers to the cost to fund long positions in the market for bitcoin perpetual swaps, a type of derivative in the cryptocurrency markets similar to futures contracts in traditional markets.

“Last week the funding rates climbed towards positive levels, but bitcoin’s momentum stopped in the middle of the week and the funding rates are now back below zero,” Arcane Research wrote in a report on Tuesday.

Further, the decline in BTC open interest (the number of calls and put option contracts traded but not squared off with an offsetting position) coupled with negative funding rates suggests that traders have been closing long positions following China’s crypto ban of last week, according to Arcane. 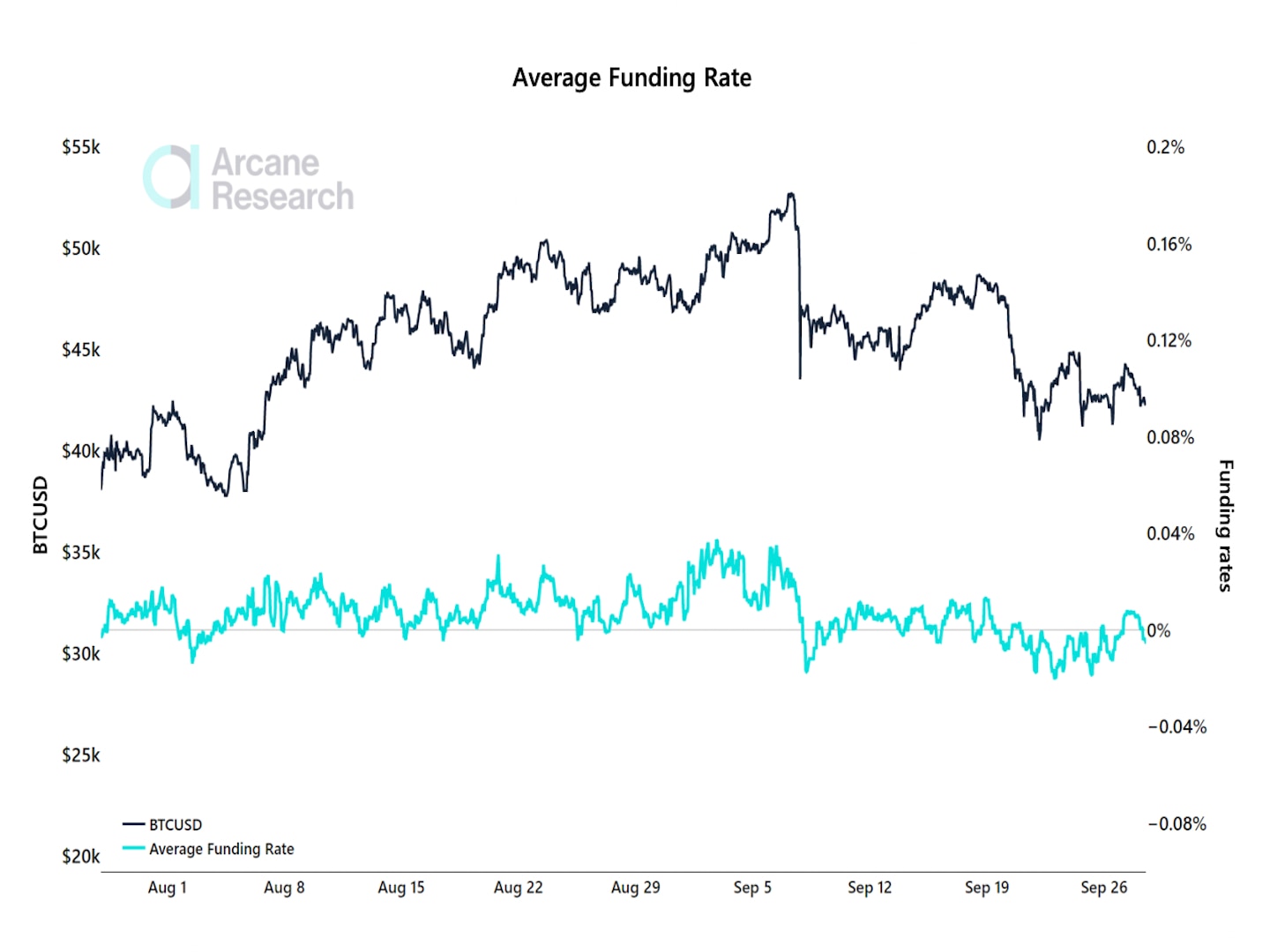 Some analysts expect BTC open interest to recover, which typically occurs over the course of the month following expiration.

Last Friday, BTC had the largest options expiration since April. “This isn’t all too surprising, as quarter-end expirations tend to be larger than regular monthly expirations,” crypto research firm Delphi Digital wrote in a blog post.

Similar to prior expirations, BTC open interest and trading volume is expected to rebound. However, “if we don’t see that bounce, it could be a sign of continued market exhaustion,” Delphi Digital wrote. 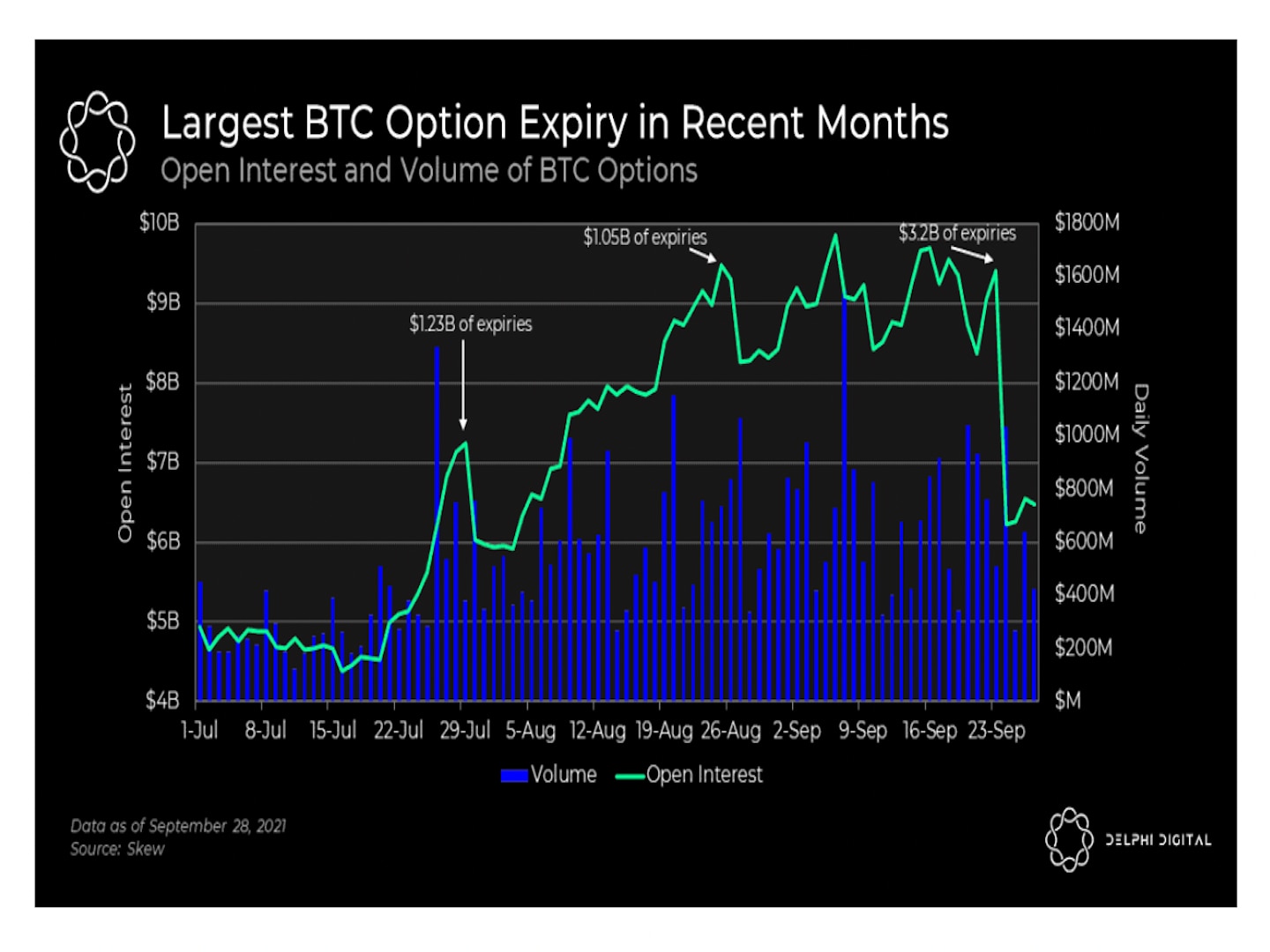