Crypto Trading 101: Bull and Bear Flags (And What They Mean for Price)

Crypto Trading 101: Bull and Bear Flags (And What They Mean for Price)

When it comes to making big money in trading, the trend is your friend.

But spotting the trend when it is in the nascent stage is challenging, and running along with it right up to the top is an even bigger challenge. That’s because asset prices rarely see a 90-degree rally or collapse.

More often than not, trends (bullish/bearish) will pause briefly to allow traders or investors who missed the initial move (higher or lower) to join the bandwagon. If the participation increases, the asset price extends the bull or bear run, or else a trend reversal may occur.

A trader can spot trend extensions with the help of bullish or bearish continuation patterns, which occur in a variety of easily identifiable shapes, some of the most popular of which are known as bull and bear flags.

(While the implication of the pattern is far more important than its name, the “flag” terminology derives from its visual similarity to the fabric you’d see hanging outside a government building.)

Each flag pattern consists of two main components: the pole and flag.

The “pole” represents a strong impulsive move (higher/lower) and is backed by a surge in trading volume and the subsequent pause or consolidation the “flag,” which looks like a falling or rising channel.

The flag pattern can be invaluable for a trader in that there are clear points of success and failure to profit or mitigate risk from. If resistance breaks in a bull flag, the trader can be confident price will continue upwards roughly the length of the pole (popularly known as measured height method).

If support of the bull flag is breached, the trader knows the pattern is invalid and continuation is unlikely. The exact opposite is the case for a bear flag.

An asset usually mimics the pole after a bull flag breakout or bear flag breakdown.

So, the target is derived as follows:

The real world demonstrations of both flag types are depicted below. 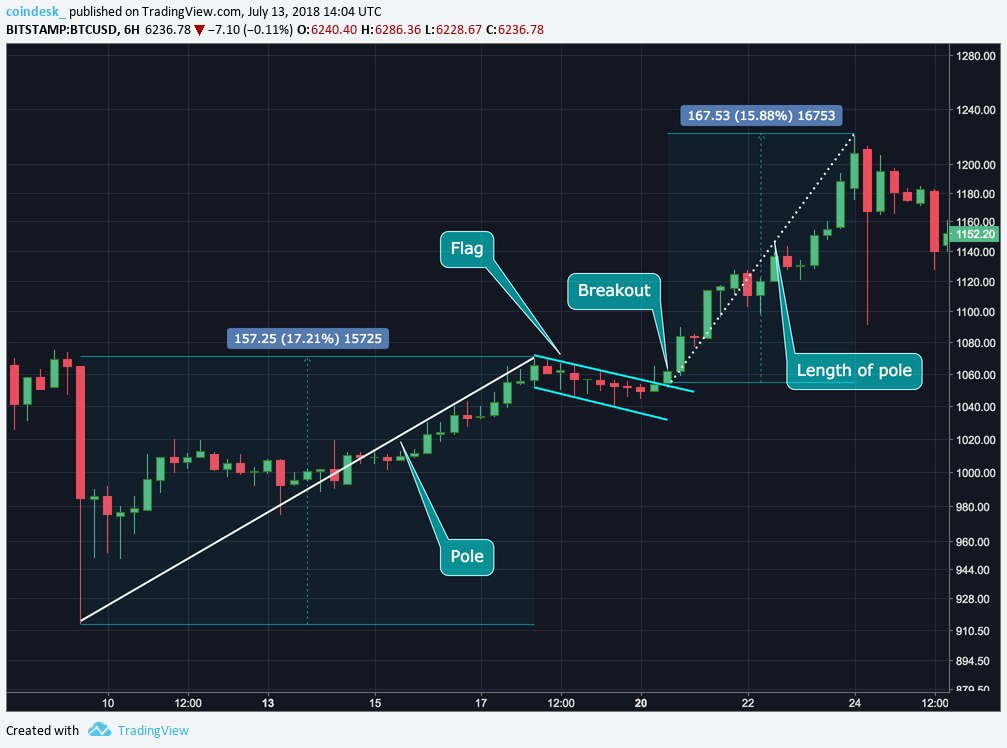 The cryptocurrency cleared the flag resistance on Feb. 20, 2017, signaling a continuation of the rally from the $917 low of the pole and opened upside towards $1,228 (target as per measured height method, i.e. pole height ($157) added to breakout price). 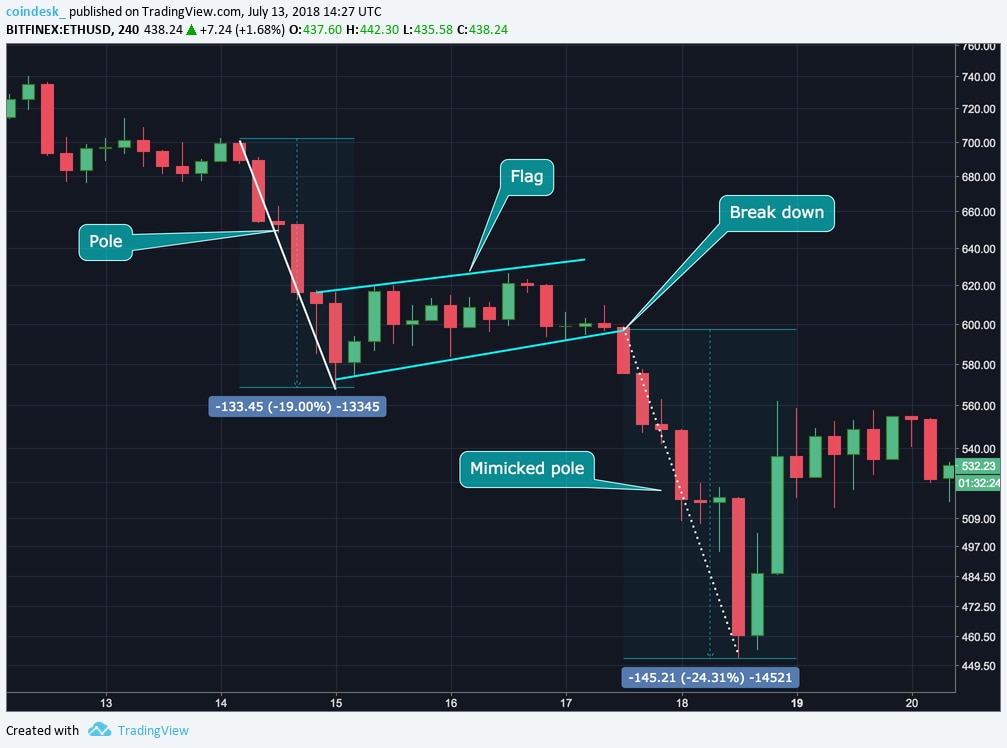 In this case, ether broke the flag support on Mar. 17, 2018 suggesting continued depreciation from the $699 pole high and set scope for $463 (target as per measured height method, i.e. pole height ($133) deduced from breakdown price).

Bull flags and bear flags can be a trader’s friend in strongly trending markets, but they do not always perform as advertised. In some cases, the pattern can present a trap known as a “false breakout” when price breaches the boundary of the flag and quickly retraces.

Waiting for a candlestick to close outside of the flag tends to add credence to the breakout, and can help the trader mitigate risk.

As a trader, you would want to avoid betting or punting on an asset price if the bull flag breakout of bear flag breakout is not backed by strong volumes. A low volume move usually ends up trapping investors on the wrong side of the market.

READ: Timing the Crypto Market With RSI (A Beginner’s Guide)