Crypto Trading 101: An Introduction to Support and Resistance

Crypto Trading 101: An Introduction to Support and Resistance

Are you a crypto trader struggling to find a footing in a volatile crypto market?

If yes, then the first thing you need to master is the art of identifying support and resistance levels.

Imagine bouncing a ball inside your house. There are two barriers that will limit the flight and fall of the ball – your floor and ceiling. In trading, there are similar barriers that limit the movement of price action known as support and resistance.

Such barriers in trading can have long-lasting effects on an asset, since price action rarely forgets its past. If traders regard a certain price level as a great entry or exit point, it will likely continue to act as a barrier for prices until all of their respective needs are satisfied.

For example, buyers will generally continue to buy at a specific price, given the asset is perceived as undervalued, until all of their demand is fully absorbed by the market. So, if buyers engage at X price and the price moves upward only to later return, the same buyers will look to defend their positions at X and potentially add more to their positions.

New buyers will see that price fell no further than X before, so are likely to consider it a safe entry. This concentration of buy pressure will prevent price from falling any further, creating a temporary floor known as support.

On the other hand, if an asset is perceived as overvalued at a certain price level, sellers will be sure to take advantage. Here, those large buyers from before will look to exit their position and take profit. It’s also possible traders will enter “short” positions at this level, given the perceived over-valuation, increasing the market’s sell pressure.

Just like when there was high buy pressure, this concentration of sell pressure will force the price level to act as a barrier, except this time it will act as a ceiling, rather than a floor, known as resistance.

The most important and easiest to identify support and resistance levels take the shape of horizontal lines as a result a trend being rejected repeatedly at a very similar price point.

Horizontal support or resistance lines can be created by simply “connecting the dots” between trend peaks or valleys as seen in the chart below. 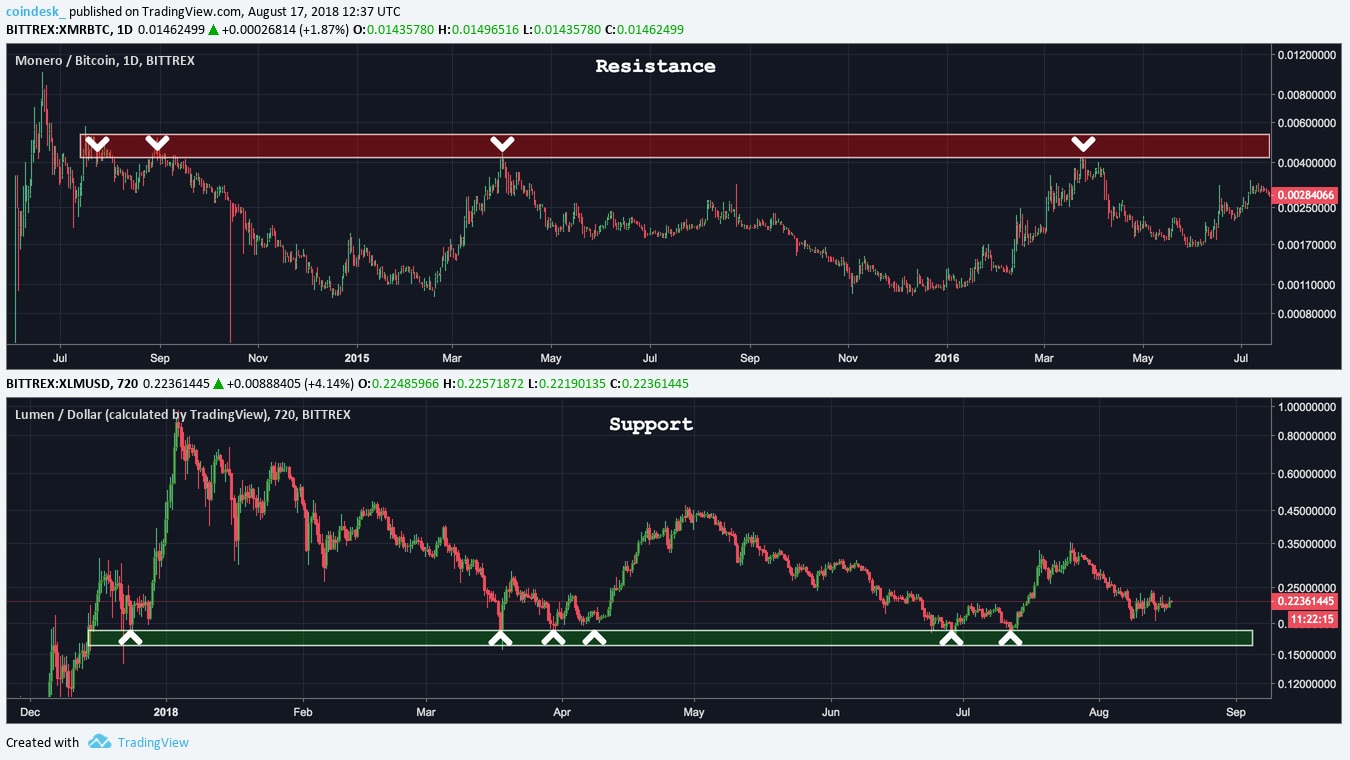 In the upper frame of above chart, sellers of XMR/BTC continually push down price from the 0.00451/BTC area, establishing it as strong resistance. Simply put, traders continued to take advantage of this area of concentrated sell pressure.

In lower the frame, buyers continually held up the price of XLM/USD at $0.17 fortifying it as strong support.

Once again, traders repeatedly took advantage of the level given the chart has told them time and time again price is more likely to bounce than fall through.

So, what happens when these levels are eventually surpassed?

As mentioned earlier, these barriers do eventually break once either the buying or selling efforts have been completely absorbed by the market. When this occurs, a major shift in sentiment can take place – a concept known as polarity.

When the selling behind an established resistance level is fully absorbed, it is no longer perceived as an optimal point to take profit, rather it is viewed as a good entry point for buyers due to the disappearance of sell pressure, as a result turning the resistance level into support.

Conversely, when the buying pressure behind a support level is fully absorbed, it will turn to a resistance level given traders are no longer interested in buying at this price.

It’s important to note that when price breaks through major support it is regarded as bearish development, that is, an asset usually drops further until sellers reach a point of exhaustion. The subsequent rebound due to profit taking or bargain hunting ends up creating a new support level.

Conversely, surpassing resistance is bullish in nature and price tends to follow the breakout until its next resistance level is identified. 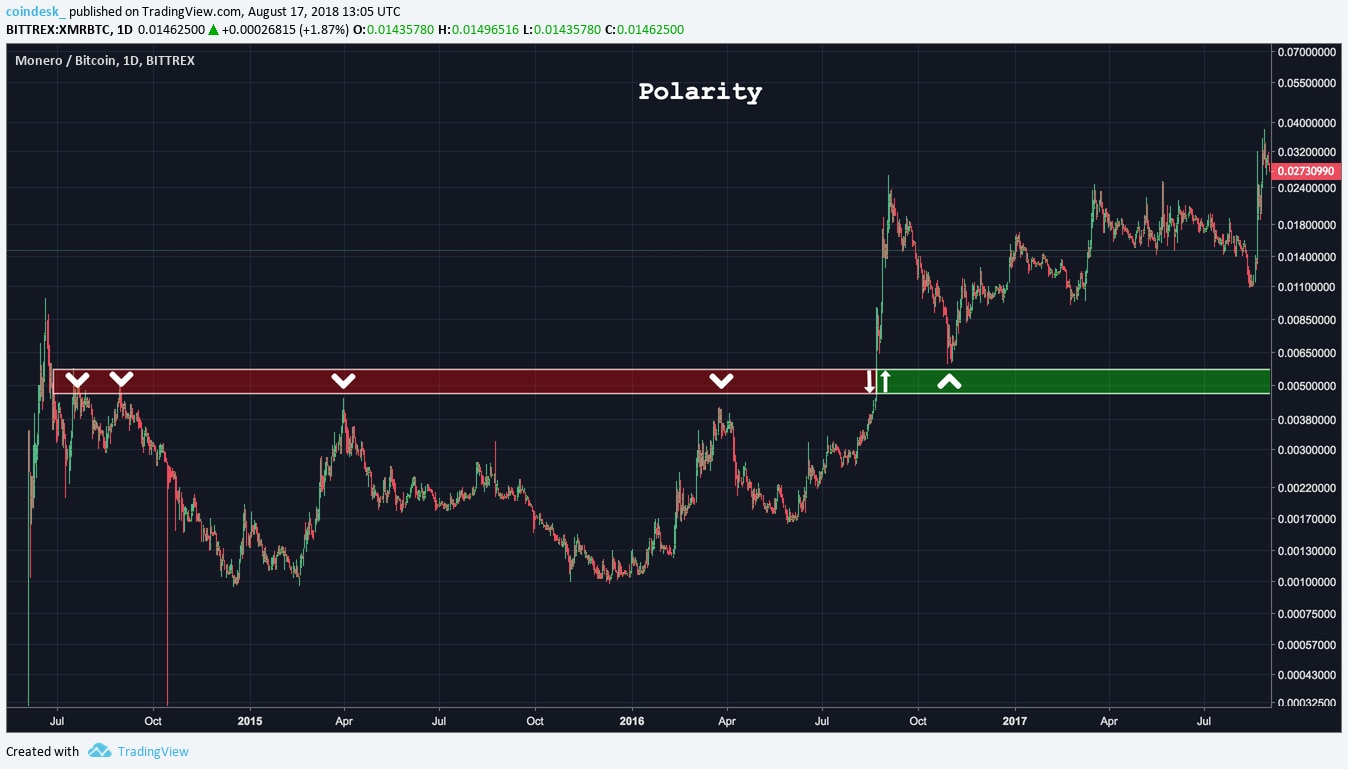 The above chart depicts the effect polarity had on the price of XMR/USD once its resistance level of 0.00451/BTC was broken. You can see that what was once established as strong resistance, given it rejected price action on several occasions, became weaker the more it was tested until it could no longer hold down prices.

Price rose emphatically once the resistance was breached due to the large shift in market sentiment that was taking place. Even after prices action cooled off, it fell to the prior resistance left, but this time it held as support – the essence of polarity.

Price trends are expected to take a breather when coming in contact support or resistance lines due to the concentration of buying or selling pressure that awaits. While the levels can act as a barrier to price action for a lengthy period, they don’t last forever as the market will eventually absorb their efforts.

Once this occurs, polarity takes effect and converts the support to resistance and vice-versa.

Long story short, support and resistance levels help identify areas of strong supply and demand. So, identifying major supports and resistances is perceived by many to be the most important aspect of trading.