Ballers, bling and botox found their way to the Rhine this week as Art Basel finally opened following a 16-month delay. After the coronavirus, the art world was hungry for a good time in this quaint Swiss city. The tony event saw sales in the many millions and enough champagne to drown a small country. Princess Eugenie, daughter of disgraced British royal Prince Andrew, was seen selling canvases as global sales director of Hauser & Wirth.

The year’s buzziest art fair welcomed hoards of collectors, some on private jets, and many of them were curious about crypto for the first time. NFTs were everywhere, and collectors, clad in Margiela, moved around like culture-vulture locusts.

Art Basel doesn’t mark non-fungible tokens’ entrance into the world of fine art. Legendary auction houses Christies and Sotheby’s have moved heavily into the scene, sports stars who might be collecting Matisse are buying “PFPs.” But the presence of immutable tokens everywhere at one of the world’s most watched art functions is a sign of the times.

The Cologne- and Berlin-based Gallery Nagel Draxler sold an NFT by the crypto-artist Olive Allen (entitled “Post-death or The Null Address NFT”) for 8 ETH, about €25,000, on opening day of the fair. 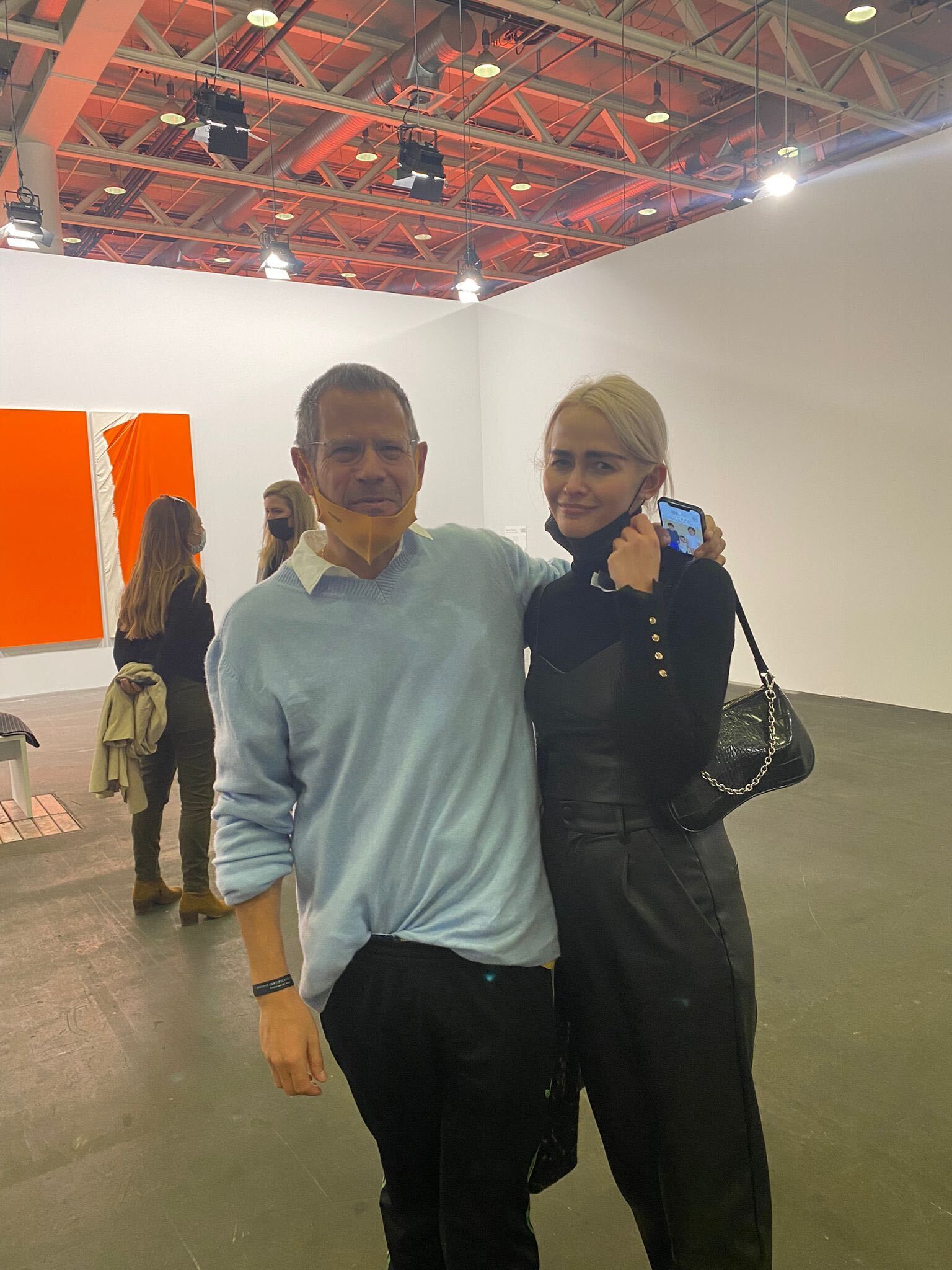 “The fact that NFTs were exhibited at a major art fair like Art Basel is a huge milestone towards its acceptance as an art medium on par with painting and sculpture,” Allen told me.

Allen, an OG known for her series of cute bears in disconcerting situations, took part in the second genesis drop on Nifty Gateway. She has made several hundred NFTs and was recently included in the first Christie’s sale of NFTs earlier this year, where she was presented alongside artists such as Banksy and Takashi Murakami. In addition to her piece in Art Basel, Allen also dropped a piece this week in Time Magazine’s Build a Better Future Project, a collection of NFTs it is auctioning for charitable causes (somewhat chaotically).

One third of the Gallery Nagel Draxler booth is curated by artist, curator and critic Kenny Schachter, who plastered the word “NFTism” on the walls and floor, turning it into a veritable crypto-kiosk. He predicted it would be the first among many at future editions of Art Basel.

Schachter also presented his own collectible series called Crypto Mutts, selling 9,000 editions of the series on opening day of Art Basel for .03 ETH each. In a Zaha Hadid Architects designed virtual reality exhibit (”metaverse”), Schachter presented a series in opposition to the NFTs projects like Bored Apes and CryptoPunks, which have often become profile pictures for the famous, rather than artworks in their own right.

“Convincing the traditional art world to appreciate NFTs for what they are – a delivery system for collecting digital art – is worse than getting torn to shreds by Discord dissenters for not getting my rarity traits in order fast enough,” Schachter said. “The digital art universe can be blood-lusty and make the elitist traditional art snobs look like amateurs in comparison,” Schachter went on. “But I’d rather be ripped another asshole for tech problems and lack of specificity with the rarity traits of my Crypto Mutts in the land of NFTism any day of the week than the past-their-sell-by-date art gatekeepers.”

Also on view in the same booth was an edition of Ridler’s Mosaic Virus, a take on “tulip mania,” a market crash that took place in Holland in the 17th century (an analogy frequently employed by critics of crypto’s market dynamics). The piece sold for nearly 9 ETH. That work is presented in the booth alongside an NFT by Kevin Abosch, which sold for approximately 15 ETH by early evening on preview day.

Galerie Nagel Draxler took a somewhat unconventional approach to selling NFTs at Art Basel, allowing collectors to pay in fiat off the walls but then purchasing the items online and storing the work in a digital wallet to finish the sale.

“Some traditional collectors are totally not familiar with these procedures,” said Denise Kokko of the gallery to Artnet. “So we made an exception. We are trying to make NFTs accessible.” When I asked why they chose the traditional art fair model to present an emergent art form and medium seemingly antithetical to it, the gallery waxed philosophical. “The most interesting crypto art is yet to come,” a spokesperson said. “As Walter Benjamin put it, new technology is first executed in the aesthetics of the era past.” (This is a theme echoed in a column recently by CoinDesk’s David Z. Morris.)

The Berlin-based König Gallery, for example, who had previously worked with both Olive Allen and Kenny Schachter in a metaverse exhibition, opted for a more traditional booth at Art Basel selling mostly paintings and sculptures.

The Tallinn-based Temnikova-Kasela also presented a more traditional booth at the fair, despite their wild success earlier this year with the launch of their Mutagen project, a collaborative NFT featuring Tommy Cash, Ilja Karilampi, Nik Kosmas and Katja Novitskova that has since sold over 600 editions at .01 ETH with a trade volume of 78.4 ETH on OpenSea. “It is still the wild west in the NFT market when it comes to institutional art presence,” Olga Temnikova said. “Big [art world] players are not massively in, so art media does not look into it as carefully.”

Meanwhile, at a nearby art fair called June, the artist Tobias Kaspar presented a fresh take on an NFT that primarily took a physical form. He stitched QR codes inside 500 stuffed bears, so buyers were only able to access the accompanying NFT after purchasing the physical toy and ripping it open to reveal the code.

“NFTs are a tool that enable us to reach a whole new audience. They open the door for the crypto community to works of art that have real significance,” Christian Andersen, co-founder of June Art Fair.

June Art Fair offered galleries a chance to mint a work on its platform (Juneart.io). One of those, Jeffrey Rosen, said he had sold several pieces and welcomed its addition as an addendum to the traditional art fair model.

“We are cultural producers providing content for currency, where that leads, is a question mark,” he said.

The art critic and über curator Hans Ulrich Obrist said crypto and NFTs can usher in new networks of interdisciplinary alliances. “Decentralization means utilizing technology different from the way it was intended to be used,” he said. “We need a detournement.” (Meaning to innovate, somewhat subversively.)

But other collectors and advisors cautioned against widespread adoption of crypto and NFTs in an industry notoriously object heavy.

“Objects are a way of turning money into trouble,” said Michael Short, an adviser active since 1986. The way that crypto entered the fine art ecosystem has been predictable, Short said, but noted that several collectors in crypto were wary of hodling paintings and sculptures.

Objects that take up physical space and require physical care are “trouble,” he said. “An object requires time, energy and money for the maintenance of its existence – shipping, storage, repair, replacement,” Short said. 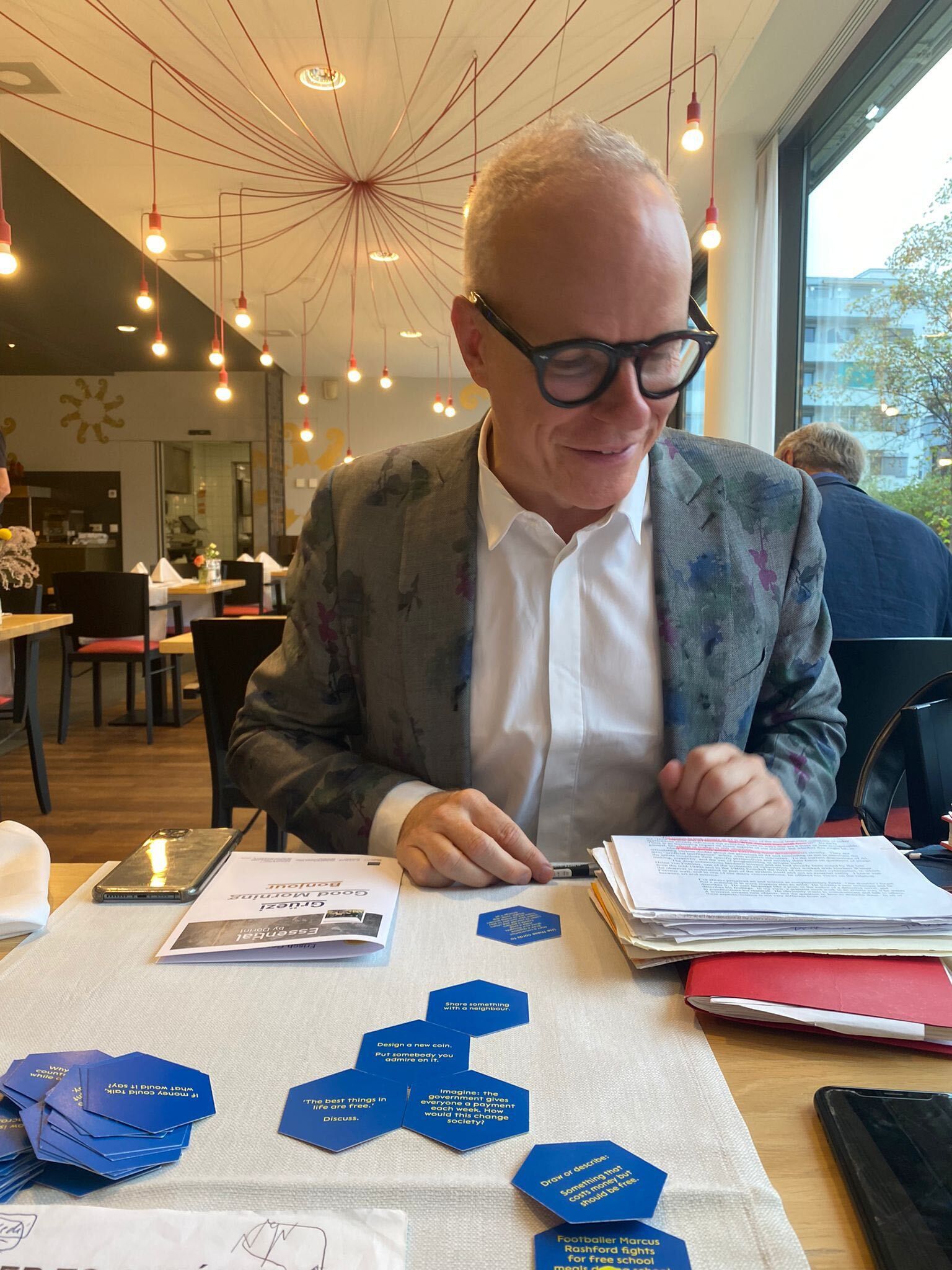 Recent trends seem to support claims that collectors are willing to make a leap into digital. According to a mid-year art market report published by the Swiss Bank UBS in September, 48% of 500 collectors surveyed said that they would be interested in purchasing digital art in the next 12 months, an increase in the year before.

Kamiar Maleki, director of the adjacent Volta Art Fair taking place in Basel, agreed, having got into NFTs this past summer. In July, Maleki curated what the Art Newspaper described as the first NFT art residency, which took place at the Four Seasons Grand-Hotel Cap-du-Ferrat in southern France. The project featured the British hip-hop musician Tinie Tempah, alongside visual artist Sassan Behnam-Bakhtiar and Vector Meldrew, who came together over a week in the idyllic French estate to produce and sell an NFT on Nifty Gateway.

Maleki also said the Volta Miami Art Fair, scheduled to take place in December, would be presenting a Superrare booth, which will produce and exhibit a NFT to be minted and sold during the opening days.

“Art fairs are about innovation and discovery,” Maleki said. “NFTs will inevitably play an important role in the future of collecting and fairs.”

The Volta Art Fair in Basel presented two galleries that offered NFTs for sale: MeetFrida Art from Hamburg and Fiumano Clase from London, signaling where the winds may be blowing.

With the pulse of Art Basel an indication of new technological and cultural trends, it would seem that the contemporary art world is now more poised than ever to adopt crypto and blockchain technologies.

The trick may be in convincing NFT artists to care about the traditional art world. With intellectual snobbery and elitism perhaps a defining characteristic, change from within is unlikely.

But never discount the will of an art adviser showing up to Day 1 of Art Basel knowing full well that money speaks loudest and clearest.