Bitcoin Eyes $3B September Options Expiry After a Drop to $40K

Bitcoin Eyes $3B September Options Expiry After a Drop to $40K

Major crypto options exchanges, including industry leader Deribit, are due to settle billions of dollars’ worth of bitcoin options contracts on Friday. Analysts don’t expect the monthly expiration to have a notable impact on bitcoin, which is under pressure this week due to macro risks and regulatory concerns.

Data provided by Skew shows a total of 73,700 options contracts worth $3.14 billion due for expiry Friday, of which nearly 50,000 are call options and the rest are puts. Deribit alone will be settling more than 85% of the total open interest.

“I’m not expecting much fireworks unless we run through $50,000; there’s some concentrated open interest there,” Shiliang Tang, chief investment officer of crypto hedge fund LedgerPrime, told CoinDesk in a Telegram chat. Tang explained that if bitcoin breaks above $50,000, traders who sold calls in anticipation of a bearish move or consolidation may resort to hedging – buying the cryptocurrency in the spot or futures market to mitigate losses arising from the short call position. That could put upward pressure on the cryptocurrency, accelerating gains.

Options are derivative instruments that give the purchaser the right to buy or sell the underlying asset at a predetermined price on or before a specific date. A call option gives the holder the right to buy, while the put buyer gets the right to sell. Open interest refers to a number of calls and put option contracts traded but not squared off with an offsetting position. A call buyer is implicitly bullish on the market, while a put buyer is bearish. 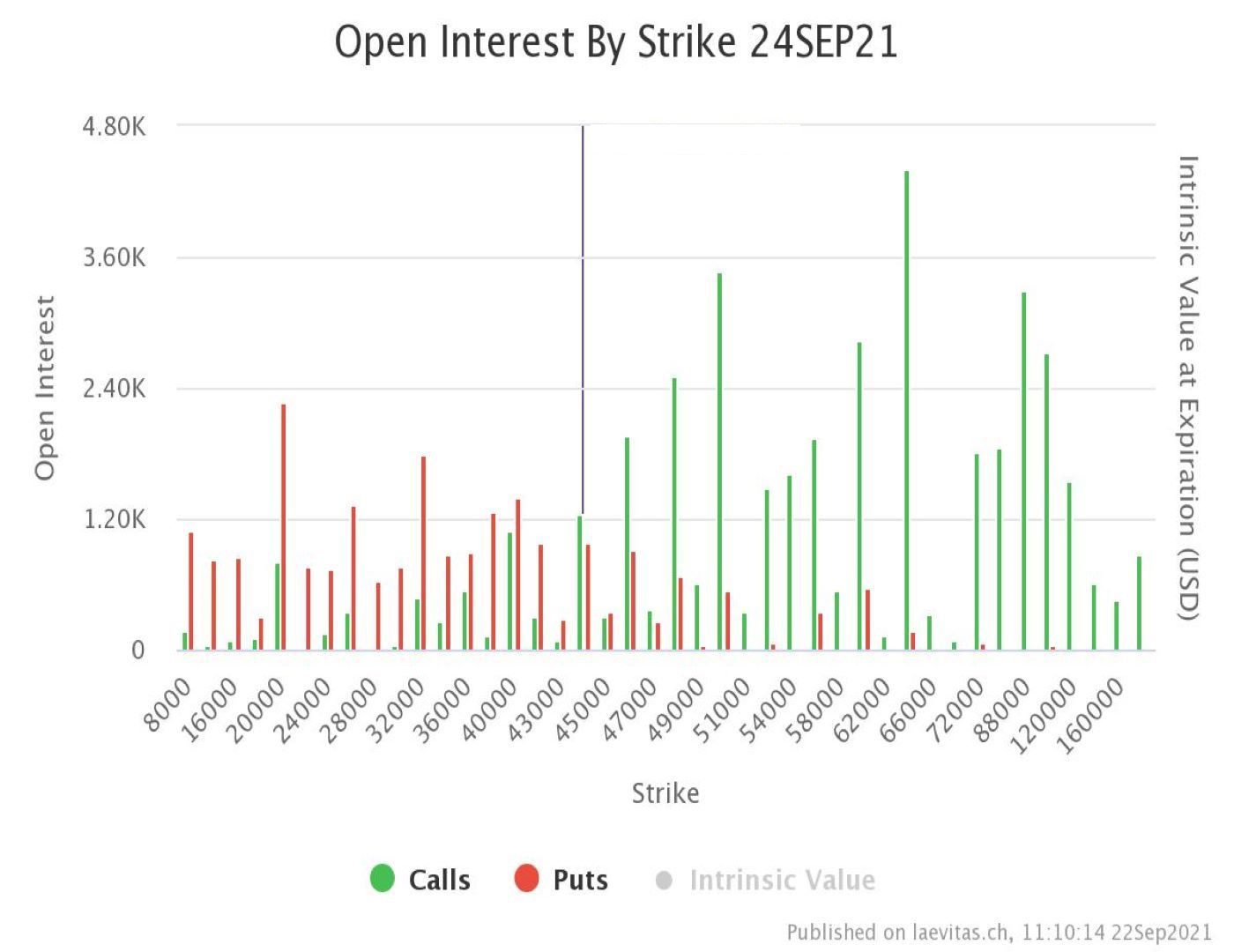 The chart shows maximum call option open interest is concentrated at strikes higher than bitcoin’s current market price, also known as out-of-the-money (OTM) calls. Most of the put options are located at lower strikes. So, the majority of options appear set to expire worthless unless bitcoin charts a big move before 08:00 UTC Friday, the designated expiry time on Deribit, where one option contract represents 1 BTC.

Time decay refers to the rate of decline in the value of an options contract due to the passage of time. The decay accelerates as the time for expiration nears. Options also lose value when the underlying asset consolidates, leading to a drop in investors’ expectations for big moves.

Had bitcoin remained locked between $47,000 and $49,000, both call and put option buyers in that region would have suffered significant losses and may have resorted to hedging.

Option expiries have gained notoriety this year, with bitcoin witnessing heightened price turbulence in the days leading up to and immediately following the monthly settlement (last Friday of each month). However, some observers say the options market is still small to affect the spot price.

“It is still too early to talk about the impact of BTC options on bitcoin itself. The only certainty is that most options will become waste paper on the expiry date,” Wang added.

As of Tuesday, bitcoin’s global options volume was less than $1 billion, amounting to just 2% of the spot market volume of $43 billion, according to data source Skew and CoinGecko.

Options market activity has slowed down in recent months. Exchanges settled a record $6 billion worth of options in March – almost double the size of the September expiry.

The Sept. 24 expiry risk reversals, which measure the difference between the implied volatility of out-of-the-money (OTM) calls and OTM puts, have come off sharply from -5 to -20 this week. The greater the demand for an options contract, the greater its volatility and its price. Therefore, the decline in risk reversals indicates investors are adding downside protection.

“The options market reflects a tremendous amount of nervousness with risk reversals sinking to -20% due to high demand for puts over calls,” Singapore-based QCP Capital said in its Telegram channel.

The cryptocurrency fell for the third straight day on Tuesday, penetrating the $40,000 mark for the first time since early August on concerns surrounding Chinese real estate developer Evergrande Group’s debt crisis and fears that the U.S. Federal Reserve will begin to wind down its stimulus program soon. The selling aggravated after U.S. Securities Exchange and Commission Chairman Gary Gensler compared stablecoins to poker chips and reiterated the call to regulate the cryptocurrency industry.

B2C2′s Farthing said, “The options market looks to be indicating an underlying view that once the short-term FUD (fear, uncertainty and doubt) about lend/borrow and regulatory concerns dies down, the market may once again settle into an uptrend into year end.”

While short-term prospects appear to be bleak, the options market continues to exhibit long-term bullish signs, with the June 2022 expiry risk reversals holding above zero. At press time, bitcoin was changing hands near $42,600, representing a 4.8% gain on the day, according to CoinDesk 20 data.