The US Inches Closer to Stablecoin Rules

The US Inches Closer to Stablecoin Rules

We’re starting to get a sense of how the Biden administration will try to regulate stablecoins. The short version seems to be: A regulatory framework that would mandate more transparency and oversight from issuers (versus one focused on the stablecoins themselves).

You’re reading State of Crypto, a CoinDesk newsletter looking at the intersection of cryptocurrency and government. Click here to sign up for future editions.

The Biden administration is moving beyond vague hints on how it will regulate stablecoins to more concrete descriptions. There’s still a lot we don’t know yet.

Stablecoins have exploded in popularity over the past year or two, with some $130 billion worth of these fiat-pegged tokens in circulation as of Sunday night, according to CoinGecko. Regulators have been eyeballing this specific sector of the broader crypto industry for nearly a year, and we’re finally seeing their response. The final regulations will determine whether some issuers have to shut down or block U.S. users, as well as what sort of transparency we can expect to see from these issuers.

Stablecoins! Yes we’re still talking about this. The Biden administration has gotten very busy around cryptocurrencies in general. The Securities and Exchange Commission (SEC) will start approving or rejecting bitcoin exchange-traded fund (ETF) applications in the next few weeks, the Office of Foreign Assets Control just sanctioned a crypto trading firm for the first time and regulators have been talking a lot about regulating the market.

Stablecoins have taken on a particular importance. The Trump administration even convened a President’s Working Group for Financial Markets meeting to discuss the issue, so it’s no surprise the current administration has been looking to enact regulations.

“What isn’t clear is what sort of regulatory framework would make the most sense for stablecoins,” I wrote in July.

We now have the first glimmer of how the Biden administration plans to answer this question: Treating stablecoin issuers in a similar way to banks.

The administration has a two-track plan here and the first depends on Congress. Should that not work out for whatever reason, officials will look to the Financial Stability Oversight Council, an interagency body established in the wake of the 2008 financial crisis to monitor risks to the system.

The congressional path seems fairly straightforward at first blush. Team Biden intends to ask Congress to draft a law that would authorize a special-purpose, bank-like charter for stablecoin issuers. This would create a federal framework for stablecoin issuance while assigning a regulator oversight authority over these businesses.

This would also impose bank regulations and supervisory requirements on stablecoin issuers, which I’m guessing would include some specific reporting or backing requirements.

“Stablecoins are like money market funds, they’re like bank deposits but they’re to some extent outside the regulatory perimeter and it’s appropriate that they be regulated – same activity, same regulation,” he said.

SEC Chair Gary Gensler has likewise compared stablecoins to money market funds, as have lawmakers in the House of Representatives and Senate.

Bank regulations are something else.

We don’t yet know the specifics of this special-purpose charter the Treasury Department is pitching. Matthew Homer, executive in residence at VC firm Nyca Partners and formerly the fintech lead at the New York Department of Financial Services, said one of the major questions is why the Office of the Comptroller of the Currency’s (OCC) current trust bank or full bank charter framework would not suffice.

Another question is whether the OCC, a federal bank regulator, would indeed be the chartering entity here, or if a different federal agency would be given oversight of stablecoin issuers.

“Would banks with normal bank charters be able to issue stablecoins? Will this have implications for other areas like the issuers of prepaid cards?” Homer asked. “In some ways a stablecoin is no different from a stored-value product like a prepaid card where you have a third-party program manager with a bank holding the deposits.”

It’s also unclear to me how stablecoins tied to decentralized finance (DeFi) projects might fall into this new framework.

Given the attention on DeFi though, I’m sure this is an area we will see addressed.

Dante Disparte, chief strategy officer and head of policy at Circle, which manages the USDC stablecoin, said in a statement that the rumored framework “is encouraging.”

“The time has come to address the risks and seize the significant opportunities of dollar digital currencies like USD coin (USDC),” he said. “Circle has already been working toward becoming a full-reserve national commercial bank, and we strongly believe that a full-reserve banking model built on digital currency technology can lead to a more efficient, fair, inclusive and resilient financial system.”

Last week, stablecoin issuer Tether announced it won a partial dismissal of a lawsuit it is fighting.

The case has its origins almost two years ago to the day, when a handful of crypto investors sued Tether, Bitfinex and DigFinex, as well as various current and former executives (and later adding Bittrex and Poloniex) on allegations the businesses manipulated bitcoin’s price; the investors claimed damages upwards of $1.4 trillion.

Tether and the other defendants filed to dismiss the case in September of last year.

U.S. District Judge Katherine Polk Failla, of the Southern District of New York, dismissed the third, eighth, ninth, tenth and twelfth counts and dismissed the sixth count for Bitfinex, Tether, DigFinex, Bittrex and Poloniex. The defendants now have until Oct. 28 to respond to the rest of the amended complaint (i.e., counts one, two, four, five, seven and 11).

In other words, Tether et al. will have to respond to the allegations of monopolization, market manipulation and fraud by the end of the month.

For its part, Tether seems pretty pleased with the current state of affairs.

“Even for the remaining claims, the Court’s order raises substantial issues that will ultimately be fatal to the plaintiffs’ case. With half their case now dismissed, their primary expert debunked, and their lead law firm embroiled in its own internecine war – with its partners and former partners trading allegations of fraud and ethics violations – this case is doomed,” Tether said in a statement posted to its website.

Changing of the guard 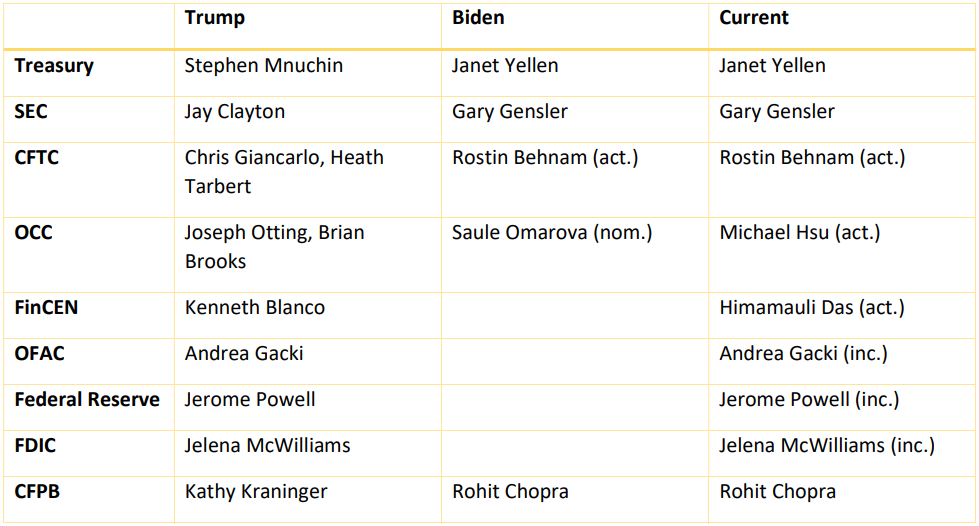 Rohit Chopra, Biden’s nominee to run the Consumer Financial Protection Bureau, officially took office after the full Senate confirmed his appointment last week. It will be interesting to see if and how the CFPB takes on crypto businesses under Chopra’s direction. A quick glance at the CFPB’s consumer database shows that crypto exchange customers are filing complaints, though the numbers are small when compared to major banks like Wells Fargo. It’s also worth noting that Sen. Elizabeth Warren (D-Mass.) praised Chopra’s nomination back when Biden announced it in January.

How it started: How it’s going: pic.twitter.com/gOhLSOBIAP

If you’ve got thoughts or questions on what I should discuss next week or any other feedback you’d like to share, feel free to email me at nik@coindesk.com or find me on Twitter @nikhileshde.

You can also join the group conversation on Telegram.