Market Wrap: Bitcoin at $50K as the Bulls Return

Market Wrap: Bitcoin at $50K as the Bulls Return

Bitcoin is trading around $50,000, which analysts consider a positive milestone after last month’s crypto sell-off. BTC is up about 22% over the past week and has decoupled from slumping global equities.

Sentiment on bitcoin significantly improved over the past week, signaling a shift away from market panic, according to the Fear and Greed Index. Technical indicators are also showing improving short-term momentum, which is consistent with rising bullish sentiment.

“We expect short-term overbought conditions to be weathered long enough for a test of minor resistance near $52.9K, a breakout above which would target the all-time high,” Katie Stockton, managing director of Fairlead Strategies, a technical research firm, wrote in a Monday newsletter.

“The move up was leverage driven, with the end of October being the highest point of the futures curve for BTC,” QCP Capital, a crypto trading firm, wrote in a Telegram announcement on Tuesday. “We could potentially see more short squeeze if spot BTC legs up higher.”

Fresh off the presses

Check out the latest quarterly report from CoinDesk Research, which outlines growing market interest in crypto from institutions, retail investors and regulators.

The bitcoin Fear and Greed index is rising from a low point last month, suggesting that investors are less fearful during the latest price recovery. Historically, extreme lows in the Fear and Greed Index precede price rebounds similar to July, when BTC traders exited short positions.

On the flip side, extreme bullish sentiment could lead to a price pullback, although the Fear and Greed index is still below highs reached earlier this year.

“After three weeks of fear, [the index] shot up during the first days of October when the bitcoin price appreciated and is now signaling a greedy market sentiment,” Arcane Research wrote in a Tuesday report. 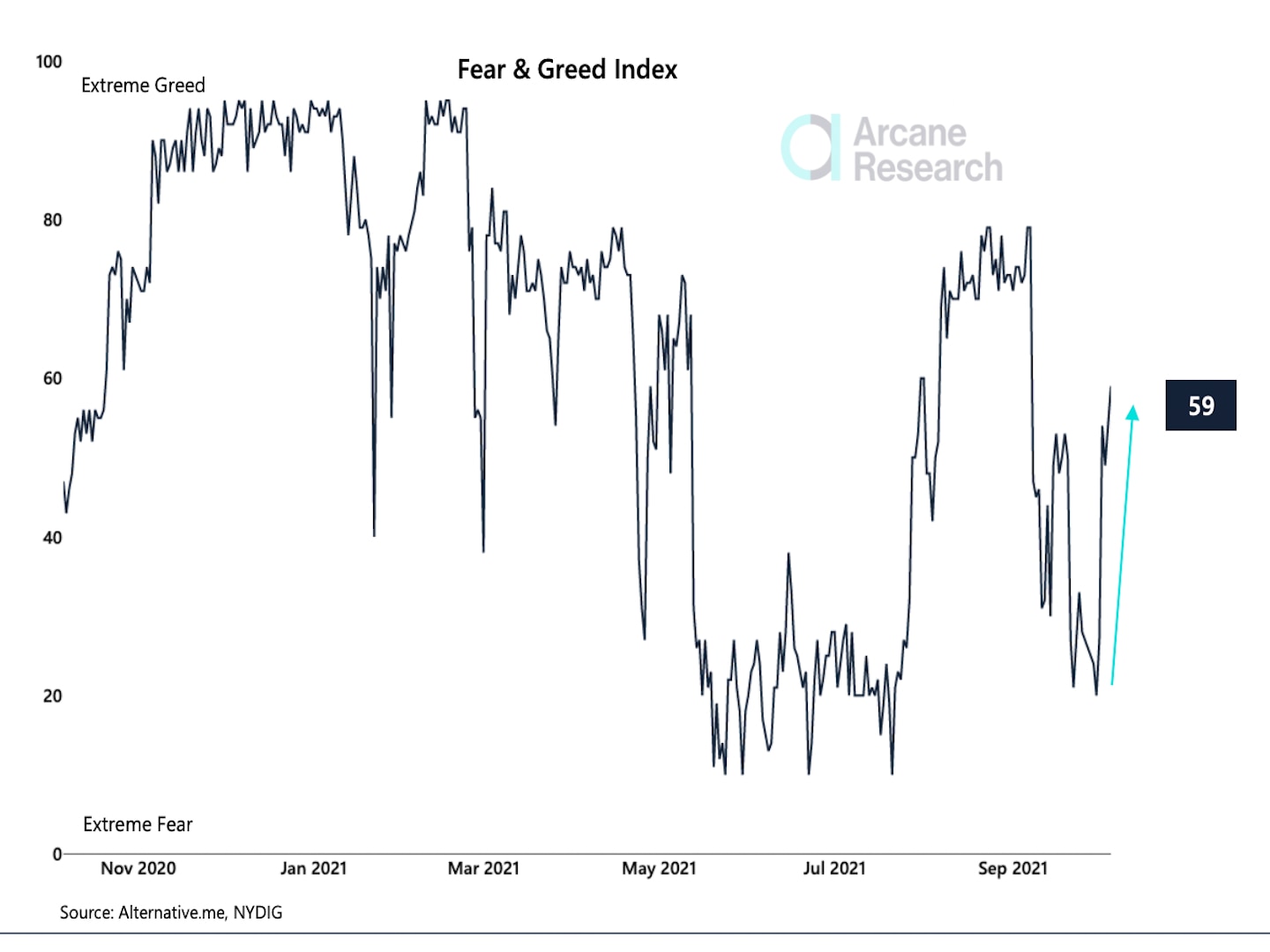 Roughly 10% of the circulating BTC supply returned to an unrealized profit (above cost basis), according to blockchain data compiled by Glassnode.

“We can therefore deduce, that alongside the $29K to $40K range in May-July, the recent lows of $40K to $41K represented a significant ‘value add’ zone for buyers who stepped in and purchased to set a price floor,” the firm wrote in a blog post.

Additionally, short-term holders, or those who purchased BTC within the last 155 days, are recovering previous losses. “As a larger portion of the market returns to profit, it creates incentives for some investors to take profits,” Glassnode wrote. Some BTC investors could also decide to hold long positions for continued upside this year.

Most digital assets in the CoinDesk 20 ended the day higher.