You Can’t Use a Trillion-Dollar Coin

You Can’t Use a Trillion-Dollar Coin

Fine, go ahead and mint the damn trillion-dollar coin. And then hang it on the wall or put it on display as a symbol of monetary – and legal – incompetence.

Proposed by Democrat members of Congress as a solution to the U.S. debt ceiling impasse, the idea behind the coin is deceptively simple: There’s a loophole in the U.S. law allowing the Treasury Department to keep spending even after the limit on how much public debt can be incurred – the debt ceiling – has been reached.

The ploy is to use a rule that authorizes Treasury to issue a platinum coin “in accordance with such specifications, designs, varieties, quantities, denominations, and inscriptions as the Secretary, in the Secretary’s discretion, may prescribe from time to time.”

Marcelo M. Prates, a CoinDesk columnist, is a central bank lawyer and researcher.

So, yes, it’s perfectly legal for the Secretary of the Treasury to wake up one day feeling bold and instruct the U.S. Mint to create a trillion-dollar platinum coin. The debt ceiling wouldn’t be raised – only Congress can do that. Still, minting a coin is different from issuing debt, like government bonds, so the public debt wouldn’t immediately grow. Problem solved, right?

Wrong. Minting the coin is the easy part. Spending the damn coin, on the other hand, is all but impossible. Platinum coins are numismatic coins. They were first introduced in 1996 by Pub. L. 104–208, which authorized the Treasury Dept. to issue them, and, in 2000, Pub. L. 106–445 made their numismatic nature clear (image below). 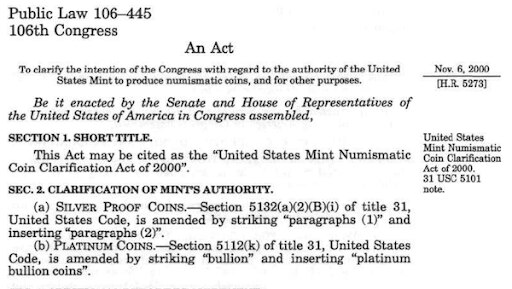 Unlike regular coins, such as pennies, dimes or quarters, numismatic coins aren’t put in circulation through the Federal Reserve Banks. Instead, they’re sold to collectors either directly by the U.S. Mint or through authorized dealers. More than that, as these coins are made of precious metals and intended for collection and investment, they are usually sold for a price much higher than their face value.

The platinum coins available at the U.S. Mint, for example, have a face value of $100 but are sold for $1,545 each. So, the question is: To whom will Treasury sell the coin in order to receive in payment “real” money that could then be spent as if there were no tomorrow?

Sure, the U.S. Mint could advertise the trillion-dollar platinum coin on its website, and maybe Warren Buffett would be willing to invest $1,000,000,000,001 in this historic coin to save the U.S. government from default.

If Buffett doesn’t come to the rescue, things get more complicated. Proponents of the trillion-dollar coin adamantly treat this as a non-issue because they believe the Federal Reserve would have no problem in purchasing the coin and replenishing the Treasury Dept.’s account with dollars that could be immediately spent.

What they ignore is that the Fed doesn’t have the legal authority to buy anything directly from Treasury, much less numismatic coins. The only thing issued by Treasury that the U.S. central bank can legally buy is government bonds and, even so, in the open market (Section 14 of the Federal Reserve Act).

“In the open market” means that, if the Fed needs to buy or sell government securities to implement monetary policy, it has to do it in the secondary market instead of transacting directly with the Treasury Dept. As a result, the Fed only buys government securities from financial institutions, never from Treasury.

This rule exists to prevent the Fed from issuing money to finance government spending. Monetary financing, as this expedient is known, has been prohibited in most jurisdictions since the 1930s to prevent politicians from using the monetary power of central banks with little regard for fiscal responsibility or price stability.

Well, but couldn’t the Treasury Dept. simply deposit the trillion-dollar coin in its Fed account (Section 15 of the Federal Reserve Act) to increase the available balance? No, because Fed accounts only receive reserves, a type of money used for payments inside the banking system and in transactions between the banks and the Fed or Treasury.

And even if the Fed received the coin in deposit to keep it in one of its safes, the Fed would be acting like a vault only, returning the coin whenever the Treasury Dept. asked for it – perhaps the day a filthy rich patriot agreed to purchase this exquisite collector’s piece.