Cryptocurrencies were mostly lower on Tuesday, tracking losses in equities after the U.S. Senate failed to act to extend the debt ceiling and avoid a partial federal government shutdown as soon as Oct.15.

The 10-year Treasury bond yield rose to 1.50%, the highest level since June, accompanied by a rally in the dollar as investors position themselves for a potential government default. When bond yields go up the bond price falls, and vice versa.

“In equities, we are about to enter the most dangerous month of the year – October has been the month where crashes and major corrections take place,” Charlie Silver, CEO of Permission.io, wrote in an email to CoinDesk.

“Crypto is vacillating between resistance and support, waiting for regulatory clarity in the U.S. and central bank moves around the Chinese debt crisis,” Silver wrote, referring to the turmoil over real estate developer Evergrande.

Bitcoin was trading around $41,000 at press time and is down nearly 3% over the past 24 hours, compared to a loss of over 3% in ether over the same period.

Ether, the world’s second-largest cryptocurrency by market capitalization, dipped below $3,000 this week, causing some traders to seek ways of cutting their losses.

The trading volume of ETH put options expiring on Oct. 8 has soared, according to data from Deribit, a crypto futures and options exchange. A large number of put options is seen around the $2,700 price level, which, if breached, can trigger long liquidations. A put option is a contract giving the owner the right, but not the obligation, to sell, or sell short, a specified amount of an underlying security at a pre-determined price within a specified time frame.

For now, technical charts show initial support for ether at the 100-day moving average, currently around $2,760, although upside momentum has significantly slowed.

“We remain wary of ETH downside for any near-term potential leg down,” QCP wrote. 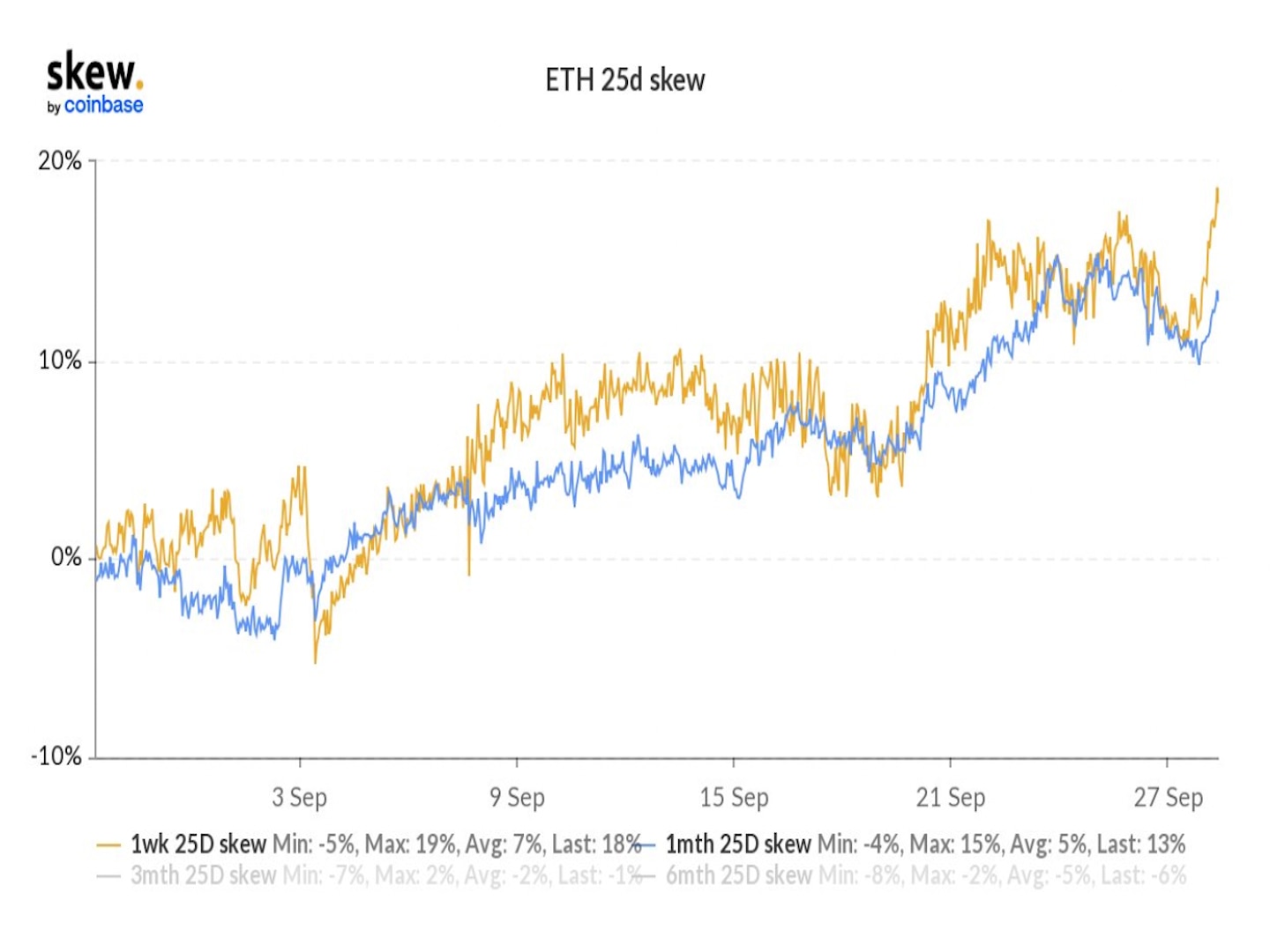 Uniswap, an automated decentralized finance (DeFi) exchange, transacted a total of 67.5 million trades since the release of the first version of the protocol in 2018, according to data compiled Coin Metrics.

“Recently, there have been ~30,000 unique addresses transacting daily, and to date Uniswap has been one of the most popular dapps on Ethereum,” Coin Metrics wrote in a Tuesday newsletter.

Earlier this month, The Wall Street Journal reported that regulators are investigating Uniswap Labs after U.S. Securities and Exchange Commission Chairman Gary Gensler stated that DeFi projects are not immune to regulations.

Despite regulatory risk and the decline in trading activity over the past few months, some analysts see long-term potential for DeFi exchanges (DEXs).

“Powered by the proliferation of new tokens, composable DeFi protocols, and an ever-increasing user base, DEXs are gaining a formidable share of total crypto asset trading volume,” Coin Metrics wrote.