Timing the Crypto Market With RSI (A Beginner’s Guide)

Timing the Crypto Market With RSI (A Beginner’s Guide)

Sure, a technical analyst can perform just fine with an understanding of candlestick patterns, support and resistance levels – but if you could add one more weapon to your trading arsenal, wouldn’t you?

If you answered yes, then welcome to the world of supplemental indicators, namely the relative strength index (RSI) – one of the most widely used technical trading tools.

The indicator is used to help identify when an asset’s price is too far from its “true” value and hence allows a trader to take advantage before the market corrects itself. With the help of RSI, traders are more likely to get a great trading entry, which makes it an invaluable tool for trading the volatile cryptocurrency markets.

Unfortunately for the 18th-century candlestick charting pioneers, the RSI was developed just 40 years ago by technical analyst Welles Wilder. The momentum indicator uses a somewhat complex formula to determine if the asset is overbought or oversold.

Luckily, you don’t need to know what the formula is or how it works in order to benefit from the RSI.

For the overachievers, here it is:

X = Recommended to use 14, but can be a number of the trader’s choosing

The formula returns a value between 0-100 which is represented on the chart in a wave-type pattern known as an oscillator.

An asset is considered undervalued or “oversold” and due for a corrective rally when the RSI drops below 30.00. On the other hand, buying pressure usually subsides after the RSI prints above 70.00, indicating overbought conditions.

The best part about the relative strength index is that it’s reliable, and the proof is in the charts.

How to Use the RSI

The RSI can help identify when the asset will cool off, if for just a brief period.

This point in time is reflected by overbought conditions in the oscillator. The higher the RSI goes above 70.00, the more overbought the asset is and deeper could be the pullback in prices. 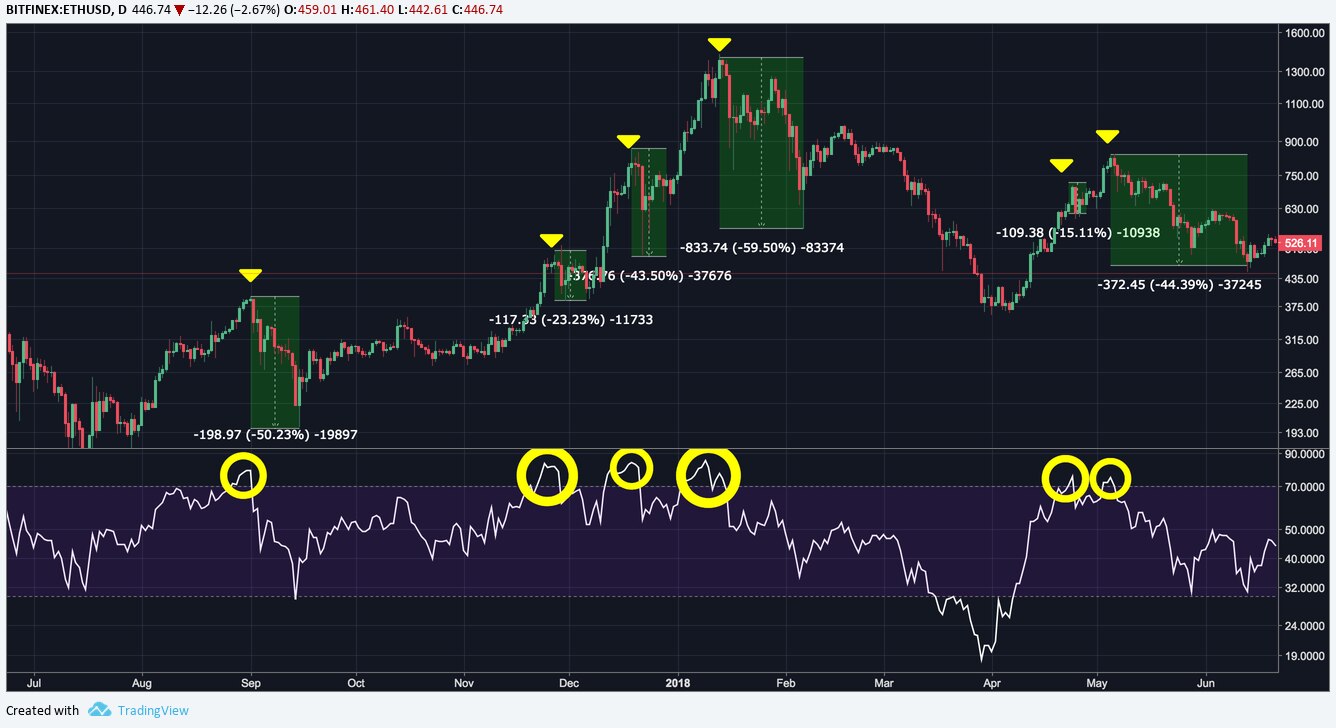 The above daily chart for ether (ETH), the cryptocurrency that powers ethereum, showcases six occasions when the RSI signaled overbought conditions.

In the following days or weeks, price declined between 15 and 59 percent, 100 percent of the time. Overbought conditions are ideal times for a trader to take profit on his/her position or close it entirely.

Those willing to take the risk of making money on the way down could even open a short position.

The RSI can also signal when the plummeting price may reach exhaustion by returning an “oversold” value. The lower the RSI goes below 30, the more oversold the asset is and the stronger could be the turnaround in prices. As seen in the daily chart above, the RSI dipped to or below 30, signaling oversold conditions four times in roughly 11 months and each time bitcoin responded by rallying 22 to 83 percent gains in the subsequent days.

Granted, RSI is not the holy grail of markets, however, the chart above shows the indicator produces good signals more often than not.