While several technical indicators help identify changes in the strength, momentum, and duration of a trend, none are simpler and more widely used than the Moving Average Convergence Divergence (MACD).

Since the MACD is a “trend following” or “lagging” indicator, it trails pricing events that have already happened in order to gauge the strength of the current trend.

Like with most indicators though, money is made by understanding how to use the indicator rather than how it works, but it’s worth explaining the inner workings of the MACD so you get an idea why it is such a beloved indicator.

There are three main components to the MACD indicator: the MACD line (blue oscillator), the signal line (orange oscillator) and the histogram.

The explanation may be hard to wrap your head around, but the MACD is one of the easiest indicators to use because of how simply it’s data is visually represented.

When the MACD crosses above the signal line, it is known as a bullish cross and when it crosses below, its known as a bearish cross. The crosses indicate a shift in trend momentum and represent buy or sell signals depending on the type of cross. 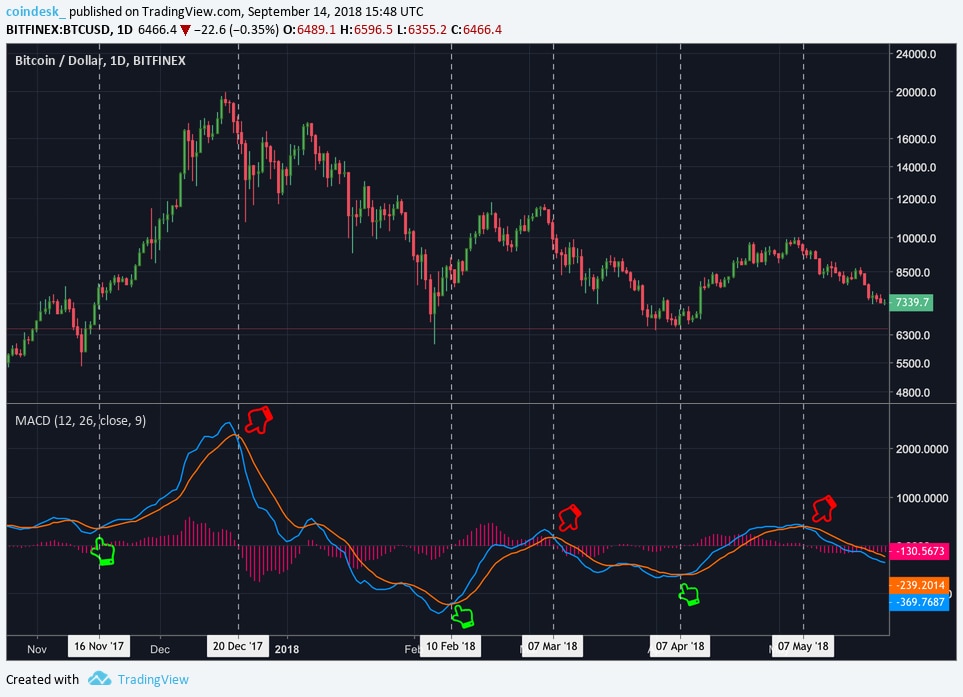 As can be seen, MACD crosses tend to provide confirmation of a trend change, at least in the short term.

For example, on November 16, 2017, the MACD line made a bullish cross above the signal line, presenting a buy signal. The MACD stayed above the signal line for over a month when the rice went on to rally more than 150 percent before its next bearish cross. The bear cross occurred on Dec. 20, 2017, which signaled a bullish-to-bearish trend change.

It’s recommended to use the MACD in conjunction with other indicators like volume, RSI or price action because like any indicator the MACD is not 100 percent accurate and can give off false signals.

For example, the bullish crosses in January and March were relatively flat and failed to stay above the signal line for very long, resulting in short-lived price rallies and poor buy signals.

The MACD is great for identifying possible changes in a trend. But it can also identify overbought or oversold market conditions, as we’ll explore below.

The conditions are presented when the MACD and signal line separate too far away from both one another as well as the zero line. 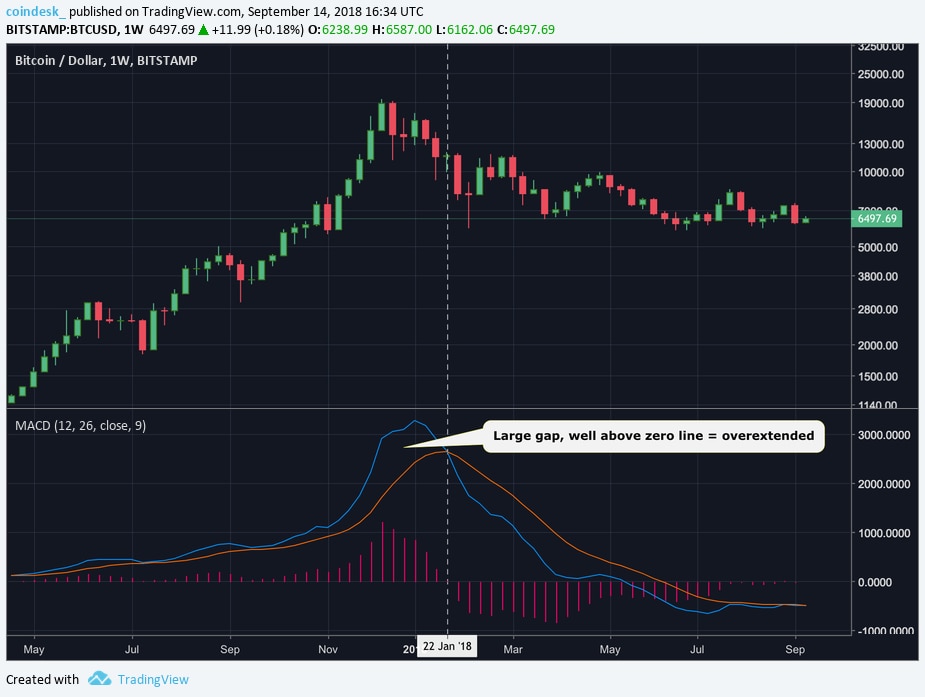 As can be seen, the MACD line began to stray noticeably far away from the signal line in December of 2017. Also at this time, both the MACD and Signal were well above the zero line.

The combination of the two warned investors that the surge in price action was causing over-extended market conditions and a pullback was becoming likely.

As you can see in the above chart, the histogram reaches its highest level when the MACD iat its farthest point above the signal line, implying the rally is becoming overstretched.

Once the pullback occurs, the bearish MACD cross and histogram retreating below the zero line cemented the trend in bearish favor.

The MACD is a great tool for the trend following traders, whether you’re a beginner or a professional.

It depicts buy and sell signals simply by the crossing of two lines, so even the most novice traders can quickly become comfortable with the tool.