Per the official blog post, the unusually low price was registered between 12:21 and 12:23 UTC on Monday when the cryptocurrency traded around $43,500 on major centralized exchanges.

The Solana-based oracle network acting as a bridge between blockchains and real world data said the flash crash was caused by two of its data sources publishing a near-zero price and receiving a relatively higher weight from the network’s aggregation logic. As such, the average price crashed to lows near $5,000.

“The Pyth aggregation logic combined these prices with nine other publishers resulting in a low aggregate price with a wide confidence interval,” Pyth Network said on Wednesday. The Pyth BTC/UDC aggregate price had several sharp dips below $40,000 on Monday and the confidence levels became extremely wide. 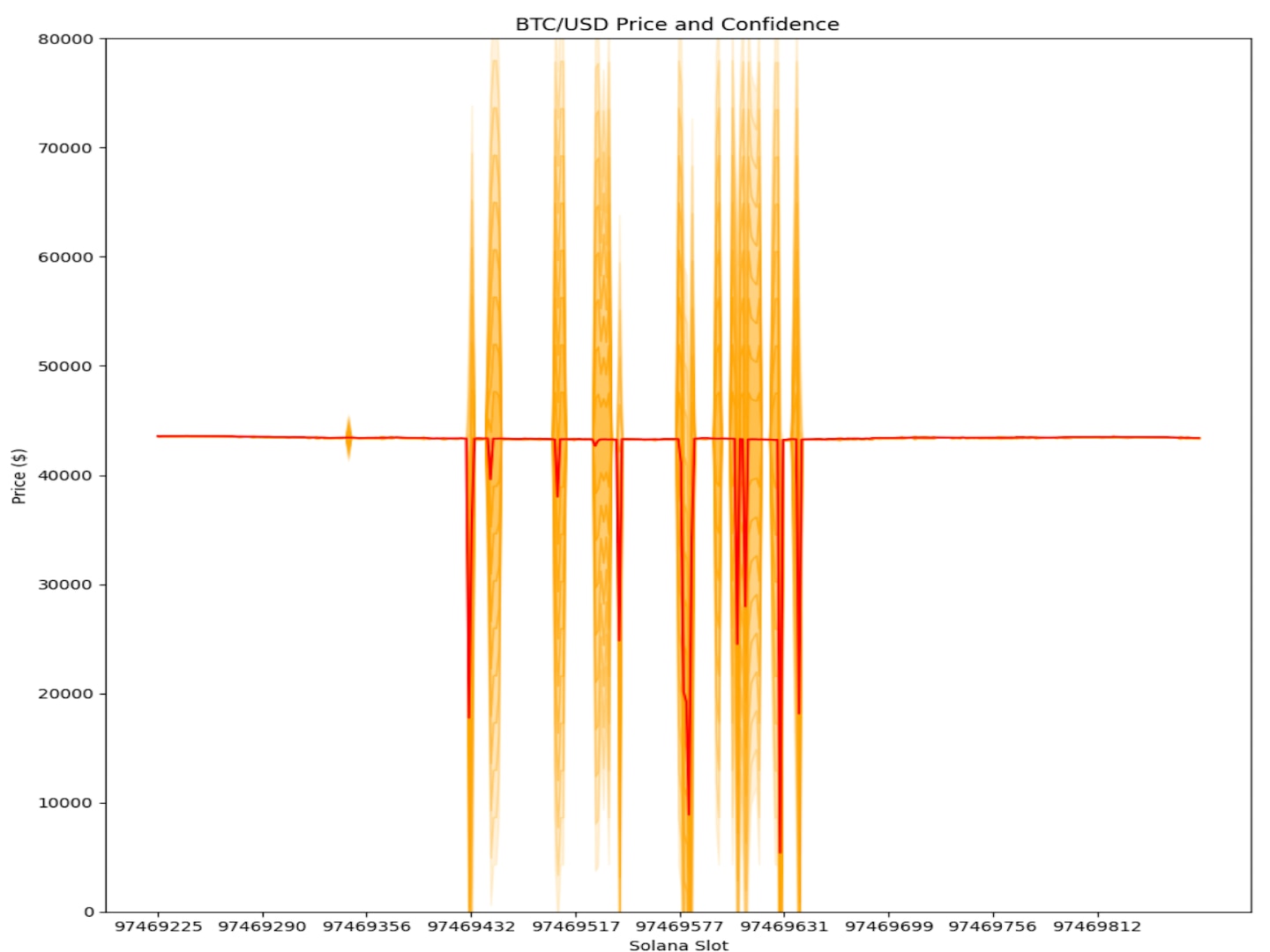 Solana programs that rely on Pyth prices were impacted by this plunge. The effect was exacerbated due to some programs relying on the aggregate price feed without using the confidence interval price, according to the statement. “This allowed liquidations to occur even though the published price was highly uncertain,” said Pyth Network.

The flash crash has turned out to be bad optics for Pyth, with the rival Chainlink community criticizing the Solana-based oracle for data inaccuracies.

4/ While one of Pyth’s primary selling points is “data accuracy,” this is clearly one of their weakest design point in reality

“On-chain oracle data often has problems with corrupt feeds or corrupt data,” said Patrick Heusser, head of trading at Crypto Finance AG. “You kind of take that as a risk if you have positions open on a decentralized exchange.”

Decentralized exchanges get their data on-chain from oracles. Data distribution on-chain is slow and sometimes false data gets distributed as there aren’t sufficient quality checks performed, unlike paid data from Bloomberg or Reuters, for example, Heusser explained.

This isn’t the first issue that the Pyth Network has suffered. Connected to the Solana blockchain, which was down for 17 hours last week, Pyth also witnessed the outage.

“Solana’s recent turbulence in the form of a 17-hour outage, which meant that users were unable to process transactions, together with an eye-catching error by Pyth data network which is run by some of Wall Street’s biggest players, is certainly not to be taken lightly by the core dev team,” said Denis Vinokourov, head of research at Synergia Capital.

However, Vinokourov added that this should not be the cause of alarm for its long-term growth prospects. “After all, it is unlikely that these issues would have manifested if not for the overwhelming growth of the network. Even Google suffers an occasional outage,” he said.

In order to avoid this from happening again, the Pyth Network said in its statement that it will be developing a suggested integration testing protocol that publishers can run to validate their software changes, making it easier to run sanity checks and validate the data.

Secondly, it will adjust the aggregation logic to properly weigh prices that span a large range of values, and lastly, it will be focusing on accurately reflecting the market through “enhanced documentation,” according to the statement.