Crypto experts said they don’t see the Federal Reserve’s impending unwinding, or tapering, of its liquidity-boosting stimulus program as a major bearish hangover on the bitcoin market.

Federal Reserve Chair Jerome Powell said on Wednesday the U.S. central bank could begin tapering as soon as next quarter, and end the program by mid-2022.

“Tapering is a matter of when. I think that has already been factored in,” said John Ng Pangilinan, managing partner at Singapore-based Signum Capital.

Since March 2020, the Fed has been buying assets worth $120 billion a month via a monetary-stimulus program known as quantitative easing, or QE. The program, launched to contain the economic fallout from the coronavirus pandemic, triggered unprecedented asset price inflation. Bitcoin, for one, charted a 10-fold rally to $64,801 in the 12 months to April 2021.

The taper talks began doing the rounds in the first quarter of this year and strengthened in mid-May after the U.S. reported inflation at a 13-year high. Bitcoin took a beating in the second half of May, falling from $58,000 to $30,000, perhaps in response to an increased possibility of the Fed taper. The move coincided with Tesla’s decision to suspend bitcoin payments for its electric vehicles amid environmental concerns regarding cryptocurrency mining.

Anthony Vince, global head of trading at GSR, said, “The crypto [world] isn’t paying too much attention to quantitative easing [stimulus], and there is certainly a lot of money floating around the system though looking to invest in crypto projects at the moment.”

Indeed, the Fed won’t just shut the money printer next quarter, and the program will be phased out slowly over six to eight months, assuming there are no new shocks to the economy. And while the central bank has brought forward the timing of the first interest rate hike to 2022, borrowing costs are likely to stay below the pre-pandemic high of 2% for a prolonged period of time.

Bitcoin hasn’t shown signs of weakness since Powell signaled the tapering at Wednesday’s press conference. The cryptocurrency is trading at $44,100 at press time, representing a 1.3% gain on the day, having risen 7% on Wednesday. That was the biggest single-day gain since Aug. 13.

“Since the Federal Open Market Committee (FOMC), markets including equities have remained bullish. We do not see any short-term risk from this flowing into cryptocurrencies,” said Matthew Dibb, co-founder and COO of Stack Funds.

Too early to call a bottom

Dibb is eyeing bitcoin’s 11% recovery from recent lows to near $40,000 with caution.

“It’s simply too early to say [if bitcoin has bottomed out],” Dibb told CoinDesk in a WhatsApp chat. “We have seen some good flows of spot buying over the last 24 hours after some favorable macro headlines; however, some fear this is a ‘dead cat bounce’ after what was a heavy and swift sell-off to support.”

Signum Capital’s Pangilinan said, “Bitcoin needs to be above $45,000 to be safe, its trading range at the moment.”

A dead cat bounce is a temporary recovery in price after a substantial fall caused by speculators squaring off bearish positions. Bitcoin fell from $49,000 to $40,000 in the three days to Sept. 21 as investors sold risk on concerns that the crisis at Chinese property giant Evergrande would spill over to the global economy. The Fed and renewed crypto regulatory fears added to uncertainty in the market. 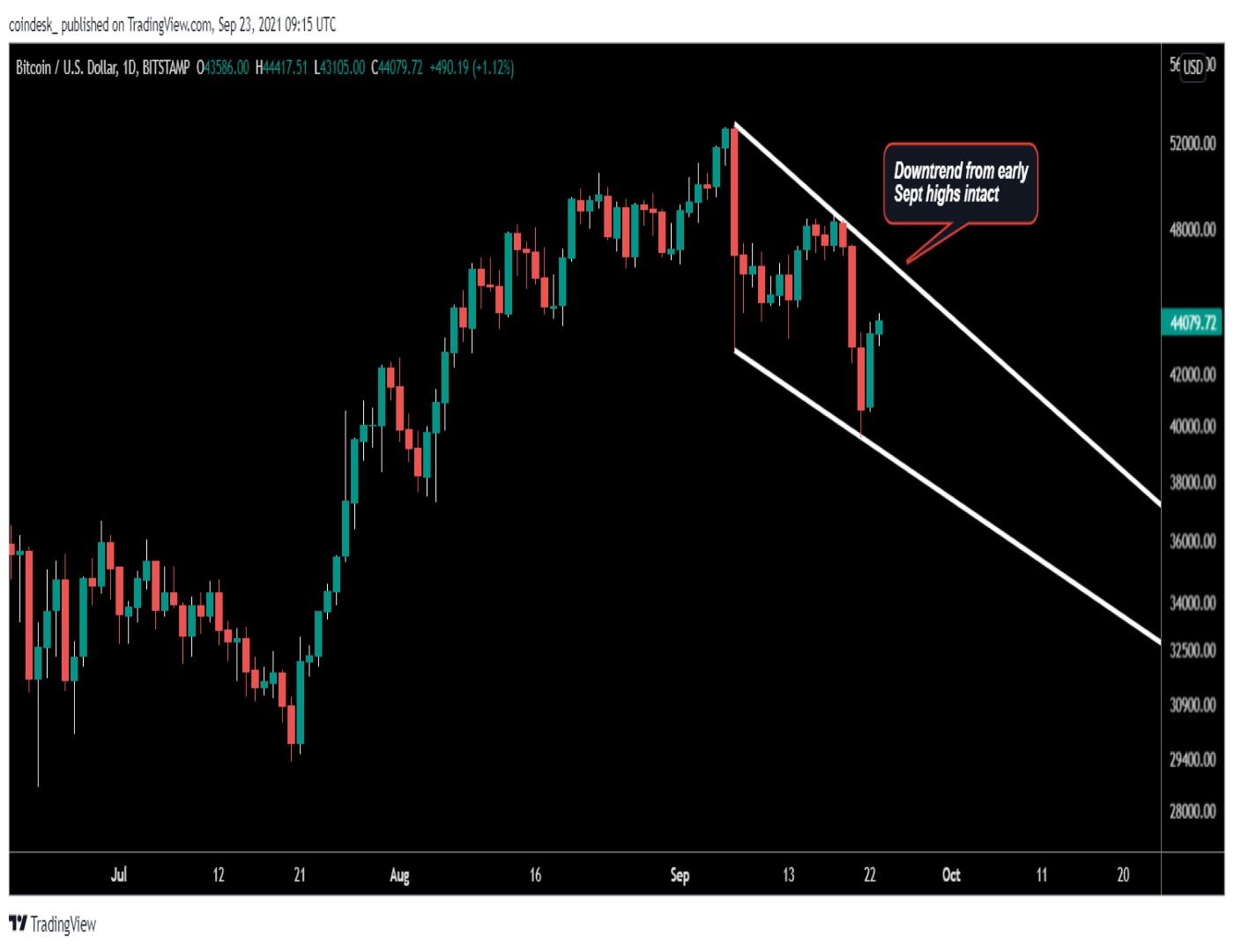 The Fed is now out of the way, and the Evergrande fears look to be subsiding with media reports stating that China may take over the cash-strapped property developer. However, regulatory risks linger and could play spoilsport.

“Regulatory clarity is the main threat to crypto growth at the moment, I would say increased clarity will allow institutions into the market since they have a very stringent reg-stack to comply with,” GSR’s Vince said.

Earlier this week, the U.S. Securities and Exchange (SEC) Commission Chair Gary Gensler renewed his call to regulate the crypto industry and compared stablecoins with poker chips. According to a New York Times article, regulators could designate stablecoins as systemically risky or treat them as securities or like banks.

Stablecoins, or cryptocurrencies with values pegged to a reference such as the U.S. dollar, are widely used to fund cryptocurrency purchases and as collateral in decentralized finance. Their market capitalization has ballooned from $20 billion to over $100 billion in one year. So a regulatory crackdown on stablecoins poses a short-term risk to bitcoin and the wider crypto market.

“A lot of headlines, including Gensler’s remarks, have certainly affected the short-term sentiment of BTC,” Stack Funds’ Dibb said. “While this will be an ongoing saga, we are also seeing some promising signs of regulatory development, including some fresh optimism that a physical or futures-based [exchange-traded fund] may be getting the green light soon.”

“Perhaps Dubai becomes a crypto center to capitalize on this uncertainty and offer a safe haven,” Vince said, adding that bitcoin would eventually resume the uptrend.

“I see BTC pushing through $50,000, with September and October being traditionally highly volatile months as the market comes back from the summer break,” Vince said.